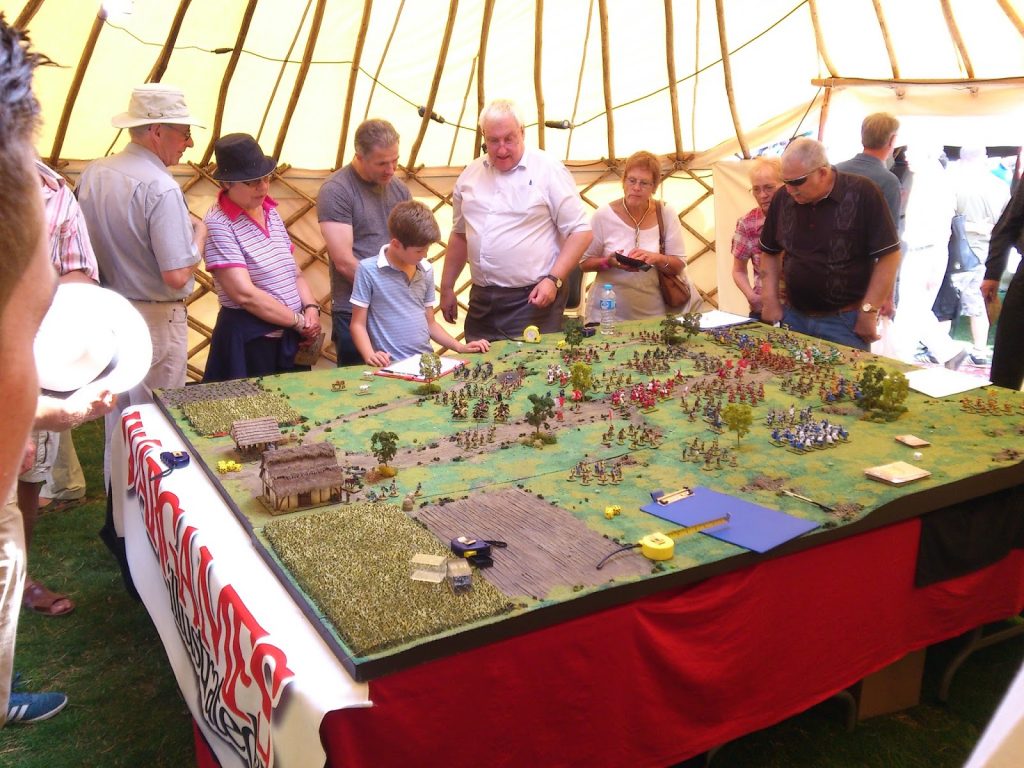 Wargames Illustrated recently attended the ‘Evesham 2015’ festival in Worcestershire, England, an event to mark the 750th anniversary of the Battle of Evesham. We took along with us our ‘De Montfort Must Die’ game, originally showcased at Salute 2015. Our friends from the Sons of Simon De Montfort Wargames Club in Loughborough did a great job of running seventy participation games (yes 70!) over the course of the weekend. ‘Sons’ club member and umpire Matt takes up the story.

It was an early start on Saturday morning for myself, Chris and Rich as we headed down in the cars from Loughborough, although special mention has to be made of Dan (WI Editor) and his family’s huge efforts in not only successfully transporting all the terrain boards, figures and display items to the site before us, but making sure we were well looked after while we were there.

The organisers had arranged for our game to be put on in a very large ‘Yurt’. So we were a bit intrigued as to what that may entail. As it happens it was a miracle of olde tyme engineering, as the owner proudly showed us its impressive design and structure. At one point he described it as “the cadillac of Yurts” which I for one couldn’t disagree with.

As anyone who saw us with the participation game at salute 2015 will attest, it consists of a representation of the battlefield of Evesham (a large sloped hill with De Montforts charge starting at the bottom and crashing its way into the Royal Army assembled at the crest). This whole thing was created by the master craftsman himself Mr Ron Ringrose. The rules had been written by Dan and called ‘De Monfort Must Die’ where a player took the role of one of the twelve assassins that were tasked to hunt down De Montfort on the battlefield and slay him in personal combat. Very simple and fun. As it happens Dan also decided on including a sort of side game for the very young children in attendance called “Spot the…” where they had to try and identify tiny details such as a wandering monk, some ducks, a cat. a lady on a horse etc. So successful was this, I made the joking suggestion that we should print the ‘rules’ as a hard back deluxe leather bound tome and charge fifty quid a pop for it.

As for the older children (along with a few of their parents) they took to the proper game with absolute gusto. At a few points during the weekend there were people lined up waiting to take their turn, and we were really bowled over by the response. Sometimes the kids were coming back two or three times throughout the day trying to beat their previous score or those of their mates. We even got a local Senior Councilwoman and her husband asking for a go!

It was a brilliant chance to introduce Wargaming to people who had perhaps never experienced it before, and whilst packing away on Sunday I smiled and expressed the idea that there would probably be people years from now saying “I played my first Wargame at the Battle of Evesham Festival!”

The Festival itself was indeed great. Very well arranged with loads of different stalls and dozens of tents for the reenactors as well as a large field for the latter when they recreated the battle. Everyone had the benefit of glorious weather and to see something really educational and inspiring.

You can follow Matt’s wargaming activities on his blog at Whippedraw.blogspot.co.uk