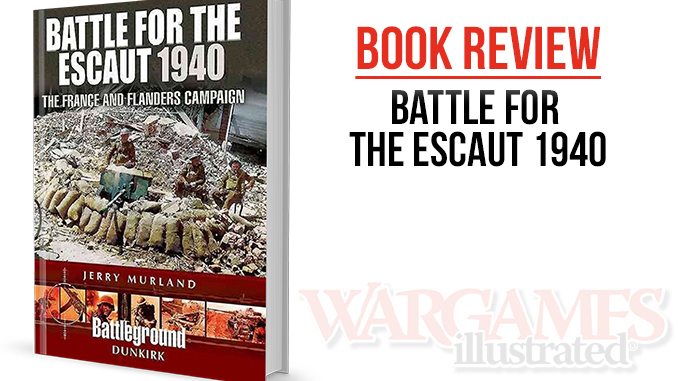 Battle for the Escaut 1940 – The France and Flanders Campaign
Jerry Murland
Pen and Sword Military, 2016
Reviewed by Dom Sore

The Battle for the Escaut took place on the Western Front between 19 May and 22 May 1940. It was part of the preliminary engagements that ultimately led to Dunkirk and Operation Dynamo. As a publication in Pen & Sword’s Battleground series, Jerry Murland’s Battle for the Escaut 1940 is part history and part guidebook. The history covers 66 pages, including a short description of the build-up to war and a chapter on the Royal Artillery. There are then 89 pages covering 6 tours, 4 for driving and 2 for walking, although the driving tours also cover some walking at points of interest. It finishes with the British Orders of Battle and a bibliography.

This is a well-researched book around a relatively little known action in the fight for France. The book is well laid out and the tour descriptions are interspersed with lots of relevant historic and modern photos. The overview of the three British Corps involved in the fighting is very well done, and the Orders of Battle provided for them are amongst the more comprehensive I have seen. These Orders of Battle are especially surprising given the small size of the book, which should fit easily into most pockets on walking trousers. Murland’s writing style is both pleasant and effective, making for an easy read, and he has chosen his excerpts well. The author seems to have taken an objective view of what happened, which is always good to see. The tour sections are all interspersed with extra bits of information regarding the fighting, which will add interest to anyone following the tours themselves, though please do not try to drive and read!

The Battle for the Escaut describes an interesting few days of hectic combat to read about and surprisingly has little of the German armoured thrusts you would expect and ‘common knowledge’ suggests was the way of war in France. In actuality armour is barely mentioned at all, this is about the infantry with some Engineering and Artillery help. There are many maps included throughout the book, however they are mainly taken from the Regimental histories that were consulted. This in itself is no bad thing, but they are often not to scale and I believe extra maps showing the dispositions of the fighting troops a little clearer would have been beneficial. They could also have been used to show where regiments were in relation to each other. Again on maps, only the two walking tours have maps provided, and these are hand drawn rather than using an Ordnance Survey style map, and so you will need to work out the driving routes yourself. Also, having mentioned the Orders of Battle for the British, it is a real shame there is no German equivalent, which would have been helpful for historians and wargamers.

Overall, this was an interesting little read which would make for the basis of an interesting touring break away with like-minded friends, especially in Belgium, with beer! It has also got me wondering about the lesser known engagements preceding Dunkirk, and I have an idea or two for future scenarios as no doubt will any wargamer playing Chain of Command, Bolt Action etc.