Battle For Britain Series: Wars of the Roses and 1066 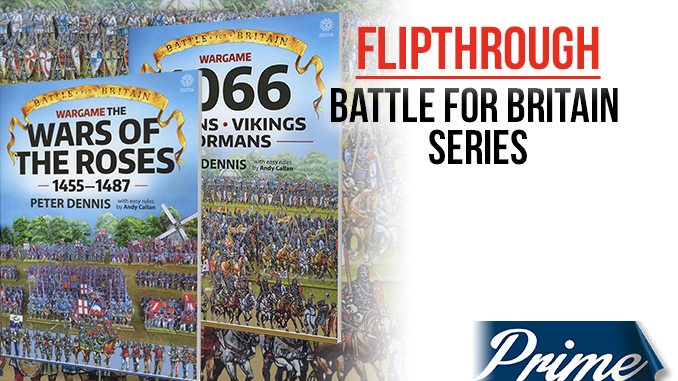 Once again, Peter Dennis and Andy Callan have produced paper soldiers and simple to play rules to enable gamers to re-enact some of the battles fought on British soil.

The 1066 book is subtitled Saxons, Vikings and Normans. So, that’s three armies in one book, allowing you to re-create the classic battles which went on to define who would come to dominate the nation.

In addition to suitable warriors and command for all the combatants involved, there are also terrain pieces such as trees, river and stream, a series of buildings for a Saxon or Viking village and even a Longship.

Andy Callan’s rules seem simple but serviceable, and he has provided a potted history / scenario guide for each of the three main battles that made up the Campaign of 1066., culminating in Hastings itself. There is even an ‘easy play’ starter game on the last two pages of the book, letting you try out the main points of the rules before delving into the more complete version.

In the Wars of the Roses 1455-1487, we have the knights, men-at-arms, nobles and archers of England who fought for supremacy, the Lancastrian and Yorkshire forces and their allies or mercenaries. Again, each stand of figures is highly coloured and well drawn, ready to be copied again and again, then assembled as per the instructions.

As well as all the foot figures, there are mounted knights, light cavalry and nobles (pages 6 and 12) plus some early artillery pieces with crew. There are the standard handgunners, billmen and banners but also wounded and arrow supply markers, which is a nice touch.

In terms of terrain, there are archer’s stakes, a windmill, a model of Wealden House and sets of Oak and smaller trees, plus hedges . Once again, there are basic starter and more advanced versions of the rules written by Andy Callan.

So, there you have it, the next two books from the Battle for Britain range from Helion Books. For those willing to take the time or looking to re-create the style of the 19th century wargamer’s battlefield, these are great resources that can last for years, allowing you to field armies of numerous warriors for as long as your copier or printer last!