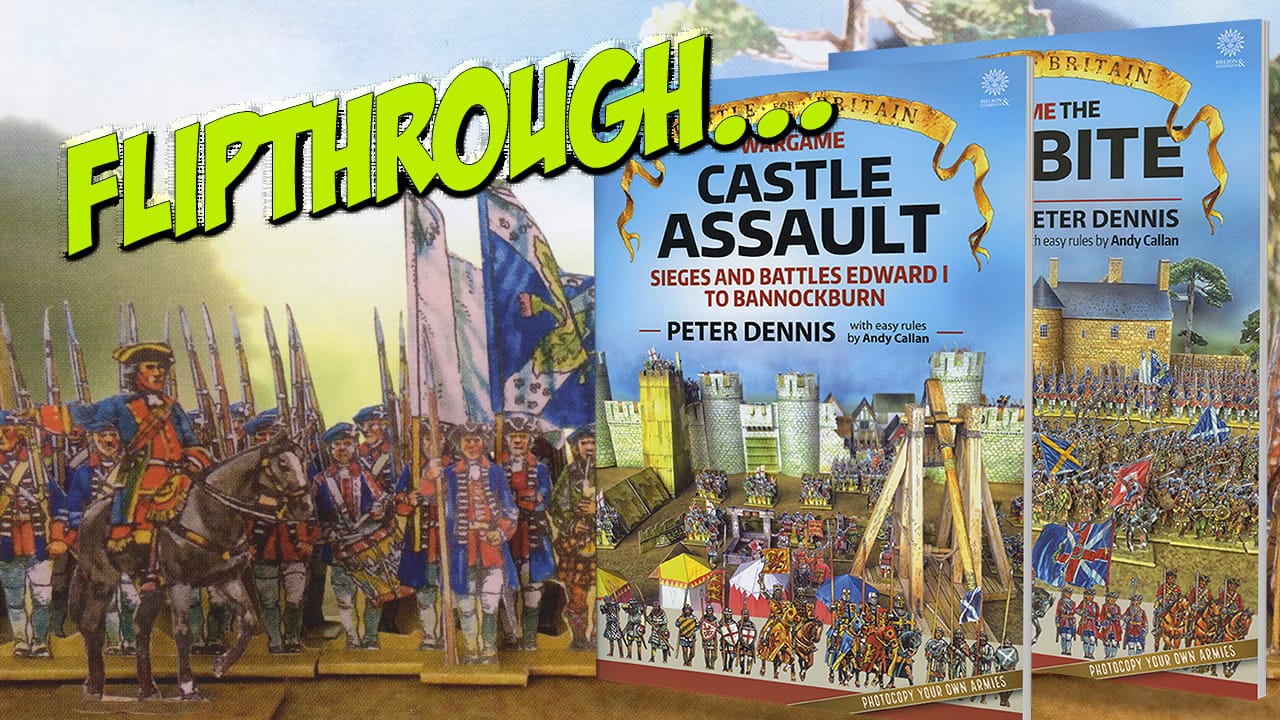 Helion and Company continues to work with Peter Dennis and Andy Callan to bring more ‘paper soldiers’ to the marketplace. Two of the latest books are Castle Assault, which covers sieges and battles from the age of Edward I to the Battle of Bannockburn, and Jacobite ’45, covering the period of warfare between the forces of the English King versus the Scottish (… OK strictly speaking Italian) Bonnie Prince Charlie.

You can read the transcript of this video below and view some snaps of Peter Dennis (left) and Andy Callan (right) and their “paper chaps” at Tactica 2018.

The Castle Assault book contains page after page of excellently rendered English, Welsh and Scottish warriors, from the Nobility and knights on foot or mounted to men at arms and peasants. Each page is designed to be photocopied onto quality paper, then cut out and assembled to create stand after stand of ‘paper soldiers’. There are also some very nicely done wagons that could be useful for a number of periods.

The main focus of the book is the ability to create an entire medieval castle. Full instructions are provided, as are all the elements to produce a Keep, round towers, walls, gate house and more, including town houses and a damaged wall section. Of course, once you have created a castle, someone will probably try to destroy it. That’s where the book helps again, with resources to create siege machines and a typical siege tower.

As always, included are a set of simple rules to be found, which allows the ‘paper soldiers’ to be fielded on the tabletop. There are also rules to allow for siege warfare against castles, plus a map and scenario detailing the Battle of Bannockburn so you can try out everything that may be created.

The Jacobite ’45 book repeats much of the pattern given above, with Redcoated English versus Scottish Clansmen. There is a basic but useful guide to the British and Jacobite forces, and page after page of infantry, cavalry and artillery to be re-created as stands of paper troops. There are also Jacobite Irish and French infantry, plus battlefield terrain of trees and typical buildings of the period.

Having constructed your armies, there are wargames rules for the period, plus a number of scenarios based upon historical battles. There is even a simplified set of rules designed to act as a quick introduction before moving on to the more detailed ones.

These are yet more worthy additions to a range of books that continues to grow. The ‘paper soldier’ hobby continues to be popular amongst a whole swathe of gamers and publications of this high quality can only serve to help it to grow in the future.