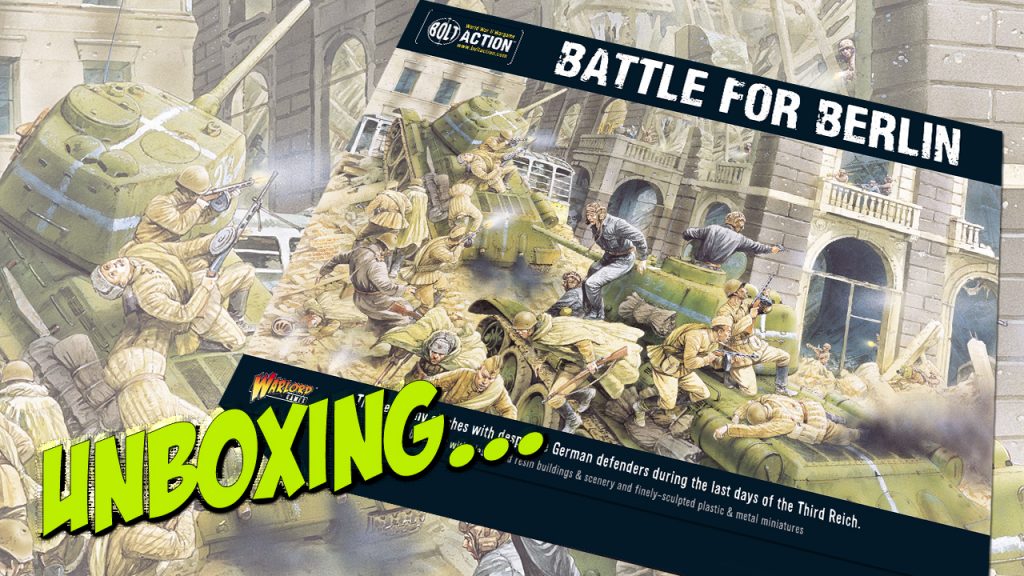 The latest boxed set for Bolt Action, Battle For Berlin, is literally packed to the gunnels with goodies. Once you lift the lid, you’ll appreciate what that means!

There are three plastic model kits in the box, two Soviet Josef Stalin- 2 (IS-2) heavy tanks, plus a German King Tiger. There are also a fair few resin items, including a welcome rendition of the Borgward Wanze tank hunter, six RPzB 54/1 anti-tank rockets tubes on the chassis of a Borgward IV demolition vehicle. A wrecked Sd. Kfz 250/1 Neu and the classic shattered German eagle with metal Soviet flag raising vignette are just some of the scenery items. There are vehicle damage markers included.

Moving on to the infantry, there are Soviet weapon sprues, plus sprues of both SS and Wehrmacht Grenadiers, a total of 24 multi-pose plastic figures. For the Soviets, there are 24 standard Soviet infantry and 24 Soviet winter infantry. Plus, of course, plenty of bases. There are two blister packs of metal miniatures, 10 Volksturm ‘Home Guard’ and 5 Hitler Youth, some of the Last Levy of defenders for Berlin.

Included in the battle set are two plastic building kits of ‘Berlin Houses’. These are the Italeri 1/72nd model kits, but are perfect for 28mm scale miniatures. Each building has internal floors and flat-topped roofs, allowing for gaming within them. A nice touch is an A5 sheet with posters, road signs and flags, plus stat cards and a decal sheet for the vehicles.

The last few items are two resin versions of improvised barricades for the city streets, plus 5 resin carters to enhance the gaming layout. Lastly, there is a booklet which provides all the rules, assembly instructions and 3 scenarios to make the most of the box contents.

All in all, this is a fantastic set which can be used to re-create the last days of the Third Reich or for earlier actions on the Eastern Front.