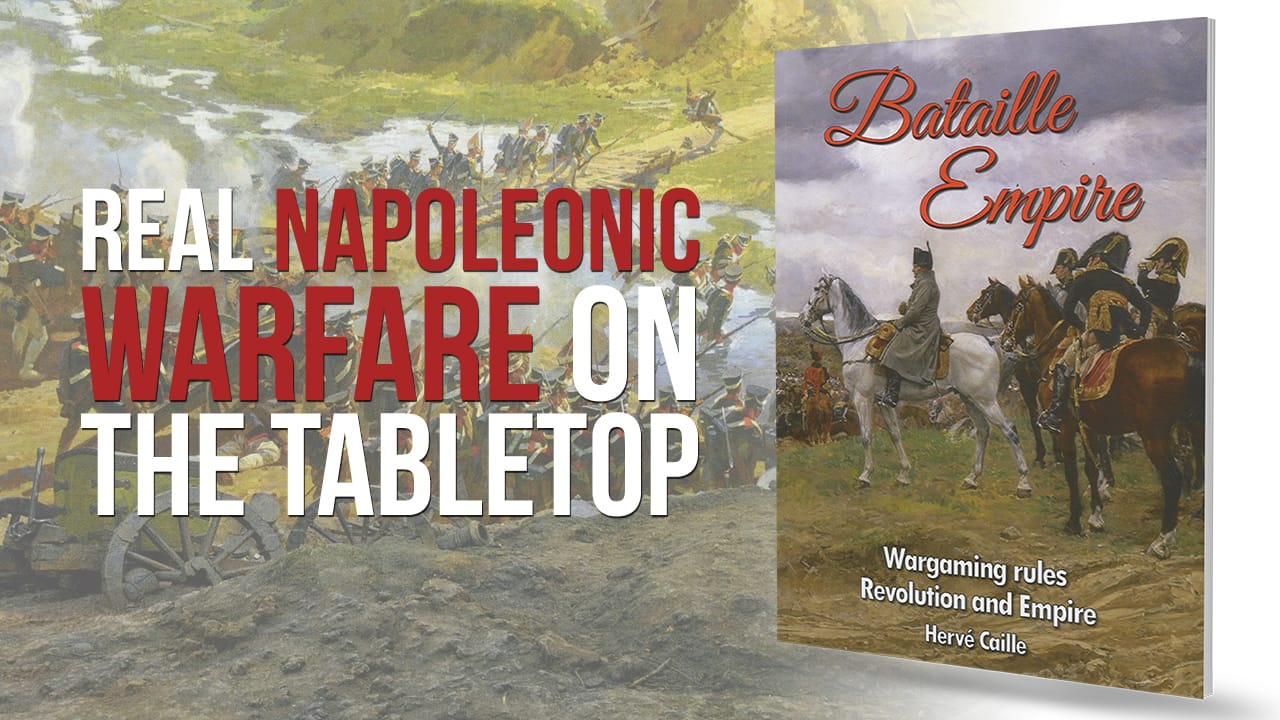 Bataille Empire is a set of wargaming rules covering the Revolutionary and Napoleonic Wars, catering for a wide variety of figure sizes. The rulebook itself is a 256-page softback and aims to both inform as well as provide ‘historical’ wargaming rules.

The introduction details the main aims of the book, being a set of rules which aims to allow gamers with any scale of figures to use fairly historical formations and tactics within a wargaming environment. The remainder of the first fourteen pages of the book introduces the gamer to the Three Weapons of the period, Infantry, Cavalry and Artillery, plus the weapons and tactics used. This is a brief but useful guide for those who are just starting out in the period or require a ‘refresher’.

An equally useful section focusses upon the issue of basing, often a thorny issue, and the use of Units of Distance, bases per unit, using different sized bases and the idea of ‘game etiquette’.

The game then moves through the use of troop attributes, the importance of cohesion, suitable formations, the impact and attributes of commanders, the simple but effective sequence of play and the use of markers to denote statuses, command points, order assignment, etc. may seem slightly ‘old-fashioned’, but is actually dealt with simply and efficiently, an updated approach on the ideas.

Movement, charging, close and fire combat and the effects of the same are all covered with text and suitable images to enhance explanation. This is all clearly laid out, with plenty of support, and a maintenance of the idea of preserving historical reality as opposed to simply making a game.

There are a number of additional rules outlined, again in a simple and ‘realistic’ fashion, dealing with matters such as the effects of Shock, rallying troops, skirmishers, reserves, the classification of terrain, using buildings, setting up a table, objectives and more.

A series of optional rules and scenarios are covered, including maps and orders of battle.

There are some extremely comprehensive army lists, both year and theatre specific, for all the usual well-known and a few less well-known armies. These are outlined using a historical perspective, whilst also being offered in game specific terms as a options, with a cost to the player’s budget for each type. Covering every possible army and unit is dealt with quite efficiently, but without the ‘bloating’ of other rules, nor the over-simplification of more generic approaches.

This set of rules seems to be one of those ‘wargaming unicorns’: a set of rules which works as both a game AND a pretty successful attempt to simulate the historical experience of war during the period covered. Those questing for that ‘unicorn’ in terms of Napoleonic-era gaming would be well served by getting a hold of a copy of these rules. Whatever size figures or basing conventions you use with your current figure collection, this is an accessible, well-explained rules system that encourages an understanding of this era of warfare and the use of accurate tactics rather than pale imitations.