Barry Hilton – A Taste of Victory! 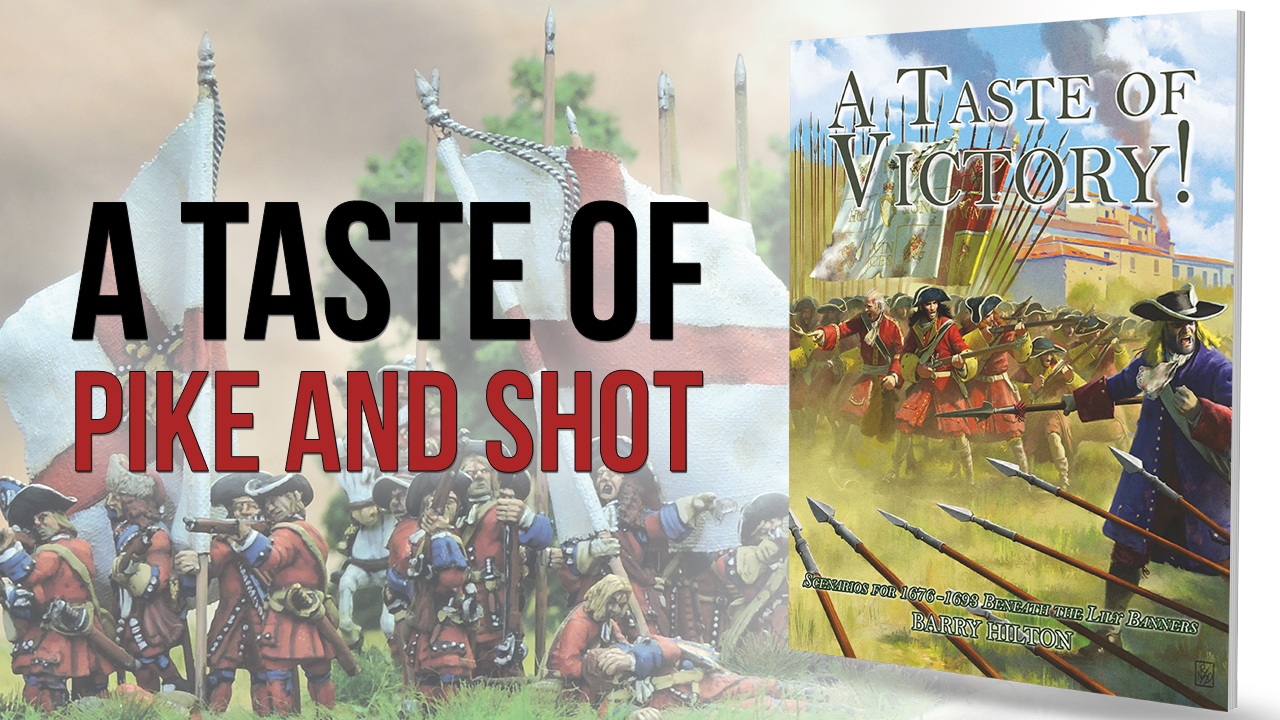 We’re opening up and taking a look at this new book from Barry Hilton. A Taste of Victory! expands on his Beneath the Lilly Banners system and it’s a hardback offering, with full-colour across its 124 pages, including a very atmospheric piece of cover art from Wargames Illustrated’s regular cover artist Neil Roberts.

After credits and an introduction, we’re straight into the first of the book’s 18 scenarios … but a wider overview of things before that as we show off some of what’s inside the book – those 18 new scenarios cover the period of 1676 to 1693 and they hop their way around various locations – largely set in Europe, but also going further afield.

If you follow Barry’s output – either the Beneath the Lilly Banners system itself, his League of Ausburg Blog, or his many articles in Wargames Illustrated, you’ll know that he’s rather keen (some might even say a little obsessive) when it comes to this period. It’s an interesting one, sitting at the transition point where the Pike and Shot era’s coming to an end and Horse and Musket is beginning, and there’s no better equipped chap we can think of to take on the subject than Barry.

So, high hopes as we get into it – the first specific scenario, on page 4, is the Battle of Halmstad, August 17th, 1676 – and it has the eponymous title A Taste of Victory! Applied to it.

The layout for each scenario follows the same template, making everything easy to follow – a section of Background, followed by design notes, objectives, and special conditions, then a detailed deployment map, orders of battle, and a smattering of inspirational photos.

In the Background here the Swedes, under King Karl XI take on and decimate a Danish force that consisted largely of German mercenaries. On the next page we get to the game details – Objectives and game length are simple conditions for completing the game – in this case the Swedes must push through the Danish army and exit towards Halmstad. If the Danes can stop them and retain half their army by turn 10 they win. A somewhat more forgiving scenario than the historical “wipe them all out” alternative and giving something to both sides to fight for.

An interesting element is the Scenario design notes – Barry discusses his thoughts behind the choices he made when gamifying things. Here, clearly, his decision making was about how to turn a very lop-sided affair into a workable tabletop battle. He explains amendments to numbers of battalions, and ratings of some of the Swedish Horse, as well as the inclusion of protected artillery behind Fyllean Creek for the Danes. This level of detail’s great, especially if (like us) you have an interest in all the behind-the-scenes processes of game design.

The next two pages show off the deployment map for the table and the orders of battle, listing the Dane’s army. Over the page are the Swedes, and some of Barry’s trademark awesome photos.

And with barely a breath taken, it’s onto the next one! There’s no through-line narrative to these scenarios, as we’re in Tangier now. An interesting one, however, because this is a redux – a composite scenario that brings in elements of the 23 years of Tangier’s occupation by the English but based around an actual battle from 1664. We like that the book’s not scared to mix things up a bit to make things fresh.

Through the same sort of design as before, with an extra box out detailing the Tangier Garrison on page 15, we get to the third scenario… and we could cover each, but it’s probably better that you go on this voyage of discovery yourself.

It’s unlikely you’ll play all of these, even if you’re very into the period – it takes someone like Barry to have all that’s needed – he’s quite a unique case. However, that’s not to say this book shouldn’t have wide appeal. There’s loads to inspire your own games here, and to learn from if you want to better understand this period.

A few stand outs for us:

So, to finish up – if this is your period it’s a must have, if it’s not it’s still a great book with tons of interesting historical and game design information. Oh, and it’s in one of those paper stocks that just smells good enough to eat too!