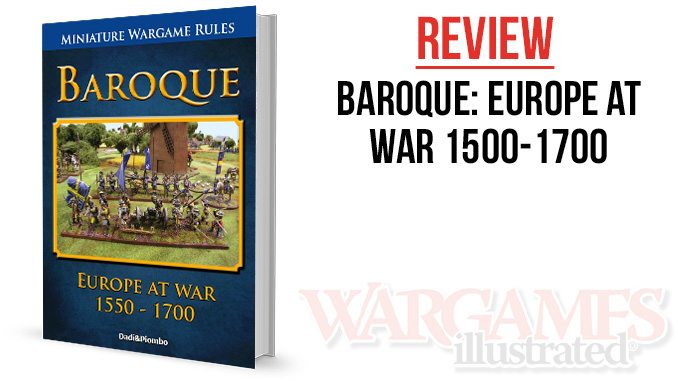 Like so many of us I like rulesets, especially if they cover an era for which I already have an army. At the moment, I have a budding English Civil War force that I’m working on therefore a new ruleset can’t go amiss. Enter stage right, Baroque produced by Dadi & Piombi and based on their popular Impetus rules. Baroque is 53 good quality pages of ring bound rules and army lists in full colour and with plenty of pictures. It also provides full rules for the era and seven army lists covering Thirty Years War German Catholics, Thirty Years War Swedish, English Civil War Royalists and Parliamentarians, Ottoman Turks, Later Imperialists, and Later Polish. The game is designed for a 6 foot by 4 foot table at the recommended points size for an army in 28mm scale. All measurements are given in Base Units and there is a table and some guidance for using different scales, which should mitigate needing to change any of your current forces.

Baroque is a nicely produced set of rules with a lot of evident preparation. Each area of the game gets its own numbered section and each subsection is numbered for ready referencing – it is very reminiscent of a business report and for once that comparison is a good thing! Within each section there are numerous examples and diagrams to explain the rules. Using the Movement rules in Section Five, for example, the Sideways and Oblique Movement rules are two small paragraphs supported by an example and a diagram. Thus little room is left for misinterpretation and clarifies much that a simple read through ordinarily does not provide. There are also tips throughout the book offered by Mary Rose and you would be wise to heed them. The terrain placement system also gives a nice feel for a General forcing battle where he wants while not getting everything his own way.

It is obvious in parts that these rules were not originally written in English, but that is only in minor parts, which do not make it difficult to understand yet can catch you unawares. That does however lead to some unfortunate acronyms, of which there are many in this book. Some of those are confusing but you will get the hang of them when playing the game. In addition, be aware that Generals are based the same as artillery – it took me some time to find that, and it should be on the basing table. Moreover, movement is based on the unit frontage rather than a standard amount, thus one base unit of movement is different for cavalry and artillery.

Pros: Overall, Baroque seems to be a solid ruleset for the period. The book is well produced, and the rules show evidence of considerable playtesting before publishing, something that cannot be said for many of the new rulesets being produced at the moment.

Cons: The only major change I would make is to make the Quick Reference Pages separate; currently that is 4 pages spread over 3 sheets.