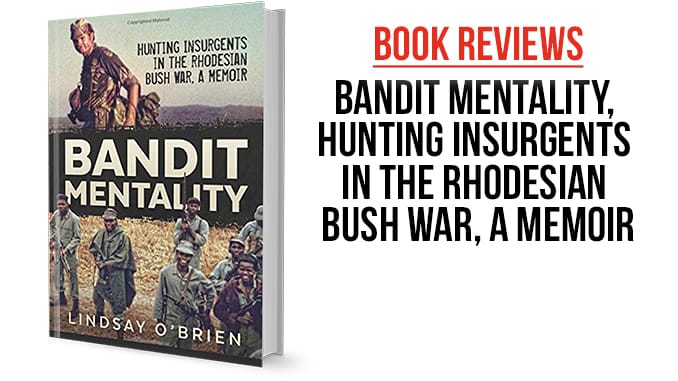 Bandit Mentality is a solid book of 348 pages with a brief bibliography and a glossary. It does however lack an index or order of battle and the maps are sparse and unclear.

O’Brien describes the book as a memoir, based on his recollections and the bibliography is of books he only consulted to check dates and places as the book was written in the last year or two. The book is as described but it is very selective in what is mentioned. It is a first person narrative of the author’s time in a police unit on anti-guerrilla duties in Rhodesia between 1976 and 1980. O’Brien was born in New Zealand, served in the army there for four years before travelling round the world and settling on a farm in northern Rhodesia. With the increasing tension and violence he joined the police and was posted to the bush and command of a section of police patrolling the borders.

While an outsider in some ways, O’Brien chose to live and work in Rhodesia and joined the security forces, so he is at best a fellow traveller of the white regime and at worst a willing volunteer though his motives are always opaque. What is clear is that he doesn’t trouble himself with the right or wrong of the political situation; anyone not for the police is against them be they villagers, guerrillas or even Catholic missionaries.

Regarding the conduct of the war, O’Brien is happy that is was sometimes necessary to beat information out of suspects while accepting that torture doesn’t work, which requires some mental gymnastics, as does his describing with approval the covert poisoning of supplies left where the ZANLA fighters would find and eat them.

The writer has a number of expectations based on race, that he would be evacuated by helicopter rather than road if wounded for example, which he duly is when a pilot defies orders to pick him up and deliver him directly to the main hospital in Salisbury. There seemed to be no belief that the white pilot would risk his career for a black constable, or indeed any expectation that a helicopter would even be requested. There is also no complaint that white officers, barely out of school and with little training, were put in charge of units containing experienced black officers, while the writer regularly complains of incompetence at every other level of the police and army.

There is little on the motivation of insurgents other than financial “kill the white farmer and take his farm” being quoted for example, but since that is how the white farmer got the land in the first place it might not be a bad justification. “Majority rule” is a term completely absent from the book, For most of the book the insurgents are simply faceless and nameless bogey men spreading terror, though it is clear that they were supported and liked by the rural population. The motivation of the black police officers is not made clear either, and seemed of little concern, which is curious given that they held O’Brien’s life in their hands.

It is a bit like reading the memoir of an SS officer on the Eastern Front, there is a lot of fascinating detail but a complete lack of awareness on the part of the writer and no suggestion that he was wrong in the side he chose. The world has changed in the last thirty years and young men do foolish things out of a sense of adventure or bravado but, as O’Brien has aged he either can’t or won’t admit that his cause was not just.

The book is very good at what happened at low level – the patrolling, the ambushes and the firefights – though action was much less common than fruitless missions in the pouring rain or blazing heat. There are countless contacts and patrols which would form the basis of a small scale campaign or series of skirmishes. What it is less good at is giving the bigger picture. We know little outside of O’Brien’s small unit and its occasional brushes with other police and army units. It is an interesting curiosity of a book but little more.