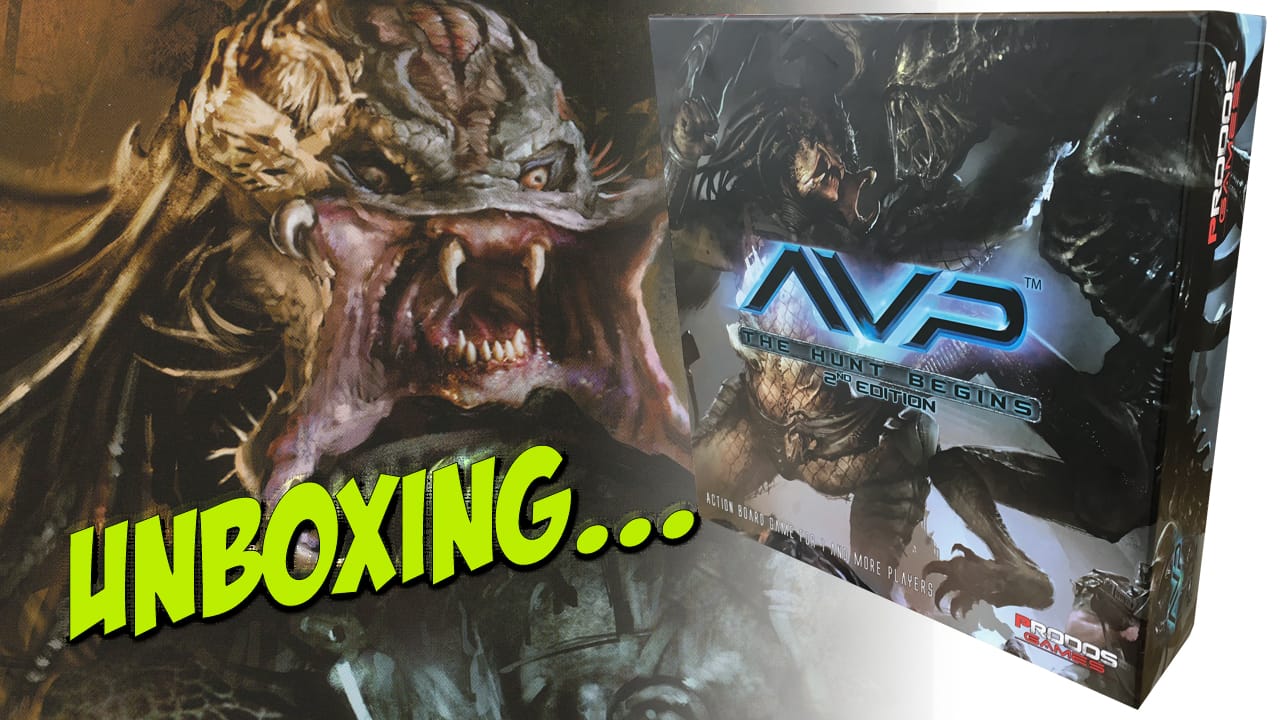 The second edition of the AvP (Alien versus Predator): The Hunt Begins is much improved compared to the original. However, its is still a packed box, complete with everything needed to game in this popular sci-fi franchise universe.

The box itself is made from a sturdy cardboard, which it needs to be given the massive amount of contents within. Lifting the lid, we find the first of many punchboards produced in durable card and containing tokens, the flexible game tiles and more.

The next item is the main rulebook, which is 64 pages in length and takes players from the basic box contents, through the miniatures, the basic, campaign and advanced rules and provides a list for each of the main factions included with the game, Marines, Aliens and Predators. There are 10 missions outlined in the book, allowing for variants in which miniatures are used. The stat lines also include details of miniatures not included in the box, so you can buy expansions as shown in the Expansion Packs booklet and already have the game details to use them. There are also options for solo and multiplayer games.

The paper and card gives way to foam and plastic as you delve deeper. Peeling back a layer of thin foam reveals the all important miniatures for the game. A nice touch is the fact that each of the miniatures rests in its own custom made ‘slot’ in a nifty piece of themed foam. Lifting out the resin miniatures reveals an image of the same, so there should be no excuses for replacing them in the wrong space. The miniatures themselves appear to be made from a resin and plastic material, durable but slightly prone to bending on the thinner or smaller parts. There are 15 Aliens, 5 Colonial Marines and 3 Predators in the box, using different colours of material to link them together.

Also provided are two spaces for the gameplay cards. There are eight decks of cards in total, with 2 Alien stat cards, 5 Colonial Marine stat cards and 3 Predator stat cards, plus 20 Mission and Environmental cards, and finally, 60 Strategy cards, which split out into 20 cards per faction. These are fairly standard, using top end production values. Lastly, there is a centre piece containing 3 D20 dice. This approach to the components and storage is a great way to keep everything together in one place.

Beneath the layer of foam are 10 more punchboards of 2D terrain, counters, tokens and door markers, all in full colour and appropriately themed with such iconic images as the metal walkways melted by acid blood, areas where the aliens have begun to build a hive and more.

Overall, this is a slick, well-produced product that helps to evoke the action seen on the screen. The fact that everything is designed to fit back in the box is a real bonus, and there are enough missions and gaming combinations to provide plenty of longevity. No two games would ever be the same, which is great to see. However, the box and it’s contents are pretty weighty, suggesting that some damage to the box may occur with prolonged usage. Overall, an impressive looking game with some great components and longevity of gameplay.