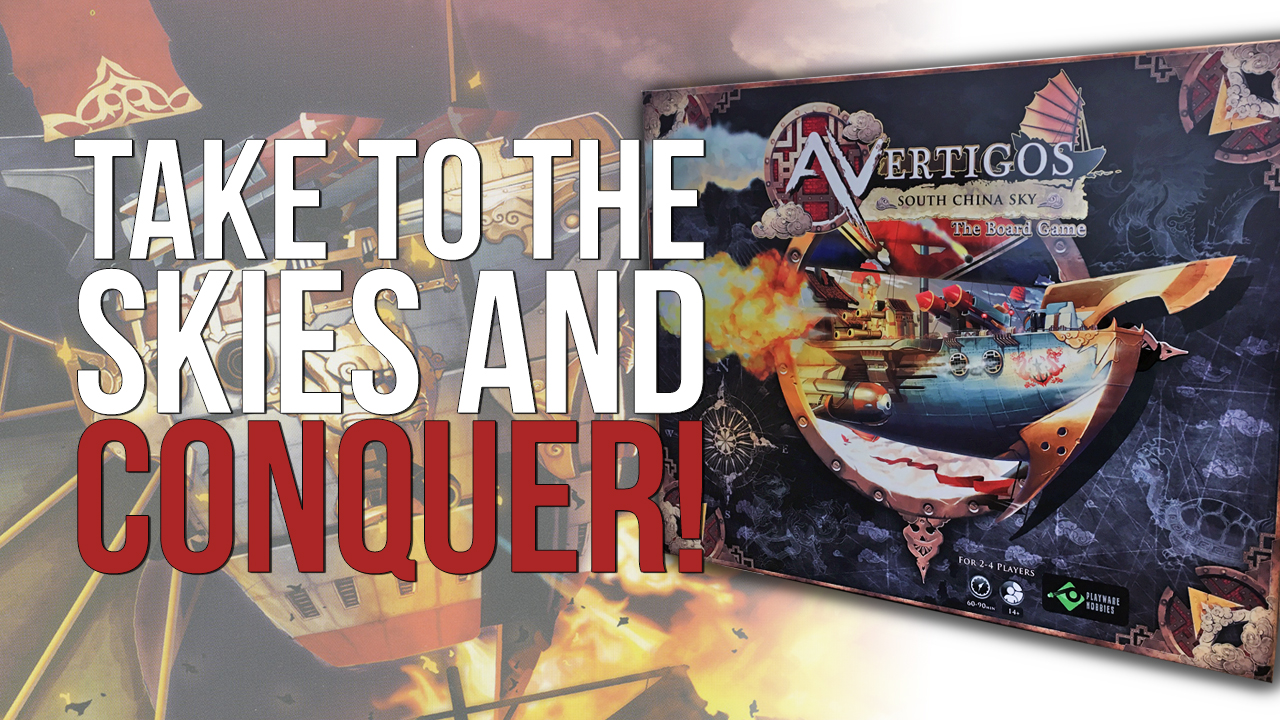 Avertigos: South China Sky is one of an increasing crop of new boxed games that crosses the barrier between board game and miniatures skirmish game. The box itself is pretty hefty, but all the components are there to play out a campaign in an alternate world of flying ships and battling empires.

Lifting the lid of the large box, we first find the 28-page rulebook plus a number of double-sided leaflets that support getting straight into the game play.  The rules work on two levels, a straightforward ship-to-ship Skirmish combat and a more detailed, Strategy level which blends the combat with the aim of conquering land in the form of islands. The main rulebook also provides some background to the two Factions, the Dynasty and the Singasari League. The rules themselves use a blend of short text and detailed visuals to outline gameplay, making each facet of the two modes simple to learn. The size of the type and frequent examples make this a very ‘gamer friendly’ book to use. The leaflets summarise aspects of the rules even more, providing ‘quick start’ and AI information for aspects of solo play.

The next component is the two-part game board, a sturdy, beautifully illustrated representation of islands of the South China Sea, with a slightly ‘alternate world’ look. Next comes a veritable mound of other components, including the ship’s themselves. The ship models are moulded in gray plastic and have six basic hull types, ranging in size from 1.5” to the largest at 5”. Each airship can be customised using a pack of ‘modules’, which clip onto the hulls to provide different offensive and defensive options. There are also plenty of flight stands, and even a ‘formation stand’ where 3 ships may be fielded alongside each other. Each ship, its crew and weaponry are represented by heavy gauge record cards which are placed in front of players for in game use, modifying as desired. Faction choices are denoted by the use of printed paper banners which are used as the ‘sails’ of the airships.

Movement is dictated by the drawing and playing of action cards, which are set up before the start of each phase. These are quite small cards printed with a range of options. A turning template is used as part of movement, with four examples in the box. There are a whole heap of six-sided dice with symbols which are used during combat, plus brightly coloured plastic tokens, and a whole variety of wooden tokens for use with the strategy version of the game. On first sight, all these components seem quite overwhelming, but whether you try the Skirmish battle game or the Strategy version, the rules are there to simply explain the use of each item and are easy to reference during gameplay.

As a ‘crossover’ game, this is a well-thought out boxed set with very high production values. The Skirmish miniatures game would perhaps be of most appeal to wargamers, and I would suggest to the company it may be worthwhile creating a ‘skirmish only’ box for that market. However, the very gamer friendly approach to offering simple to understand and reference rules and a different, beautifully realised backdrop serves to make this a game that is well worth picking up and one that will give many hours of gameplay in return for the money and time invested in it.