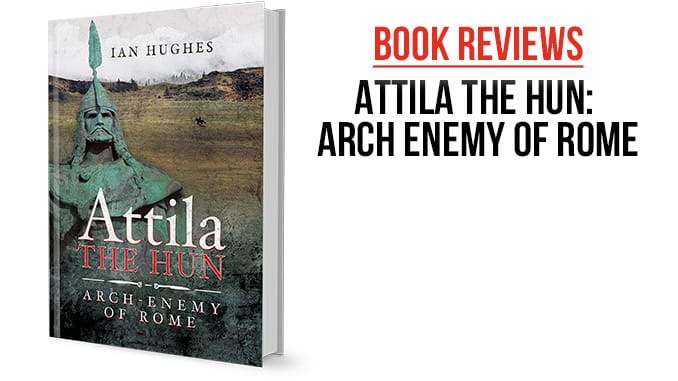 Even today Attila the Hun occupies a unique place in the minds of modern Europeans.  It is not Alaric the Goth, who actually sacked Rome, who is used as a synonym for barbarian hordes, or as the punchline for jokes about totalitarian politicians; that is the legacy of Attila.  It is the Huns who were referenced by World War I propaganda, albeit self-determined by the Germans themselves.

Ian Hughes’s book is a comprehensive, academic work, which discusses in exceptional detail the origins and culture of the Huns, based on what remains of the primary sources.  Mr Hughes is clearly a historian of skill and experience who bases his conclusions on logic and sound reasoning.  He dismisses, with professional common sense, old fashioned thinking and puts forward reasonable propositions, whilst acknowledging the paucity of his evidence.  As with all historians, he makes jumps in understanding to suit his line of argument, but these are not unreasonable and are certainly no more unlikely than older thinking he references.

For a wargaming point of view there is a cornucopia of information for scenarios and campaigns, whether it is involving the Huns as an entity, fighting Alans, Goths or possibly Chinese armies, to the inclusion of Huns as auxiliaries in Roman or Goth armies.  Mr Hughes discusses at length the manner in which the Huns fought and discusses the logistics of maintaining large cavalry based armies without the vastness of the steppes to support them.  He dismisses (and his arguments are well argued) the proposition that the Huns reduced the cavalry element of their armies when siege warfare and extended campaigns in areas where forage was less available.  His arguments about the nature of Hun warfare are interesting.  He argues that the Hunnic horse archers were different to those encountered by the Romans since the First Century BC in that they relied on accuracy and skill rather than volume of fire exhibited by the Parthians and Sassanids make a lot of sense.  Steppe nomads would not have access to the arrow supplies necessary for that tactic, nor the logistics necessary to maintain this supply.  Mr Hughes makes the point that the Romans did not recruit large numbers of horde archers until they faced the Huns.  The point being that the Huns were born to it rather than the Parthians and Sassanids who were trained to it.  Interesting when designing army lists.  However in conclusion he does acknowledge that the Huns were less successful in a strategic sense than other barbarian invasions such as Vandals and Goths.  He also draws the conclusion that the Huns were not particularly successful in pitched battle, a well illustrated argument, but more large scale raid experts who took the phrase “extortion racket” to its zenith.

Overall this is an exceptional work at the academic, but accessible end of the spectrum, which is based on and presents the evidence in a helpful way which makes the wargamer think about the Huns in a more reflective way.