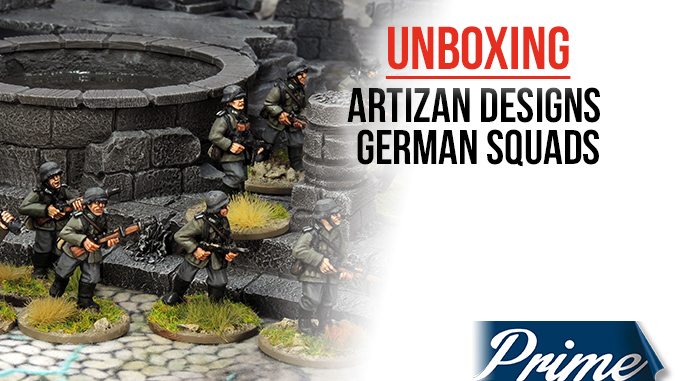 A new and upcoming boxed set release from Artizan / North Star focus on the German army during World War Two, almost charting the progress of uniform development over the course of the war.

The latest offerings are three boxed sets of German infantry, with one being so new that we don’t yet have box art for it!

All the figures are wearing typical Late War issue smocks, which can be painted up in the camouflage colours of your choice. They also sport the short boots and puttees and the mix of equipment common from the post-1943 period.

As you can see from these spin-arounds of unpainted miniatures, all the figures have a wealth of detail but are relatively simple to paint. They have a mix of poses and extra pieces of personal equipment to add some variety.

Moving on to the next boxed set, something a little different, with all new sculpts of a Panzer Lehr Grenadier Squad. The Panzer Lehr Division was unusual in that the infantry wore the same uniform as the tank troops but in Field Grey rather than black

The box consists of 2 NCO / Officer figures with MP40, 1 figure with MP40 slung across his chest and a Panzerfaust carried on his shoulder, a walking gunner and loader figure for an MG42 and 5 soldiers with Kar 98K rifles.

The last boxed set of Germans represents a German Infantry Squad 1942 from earlier in the war, in this case 1942.

Being from the Early War period, these figures sport the ‘classic’ uniform of Field Grey tunic and trousers with jackboots. You get 2 NCO/Officer figures with MP40, 6 figures with Kar 98K rifles and a gunner and loader for an MG42. These would also serve as troops from the 1939-1940 part of the war, although not for after 1942,as equipment and armament did change.

Visit the North Star Miniatures or Brigade Games websites and check out these and other figures in the range. An fourth upcoming set will apparently feature a Soviet Infantry Squad and we’ll try to get hold of one to show you soon.