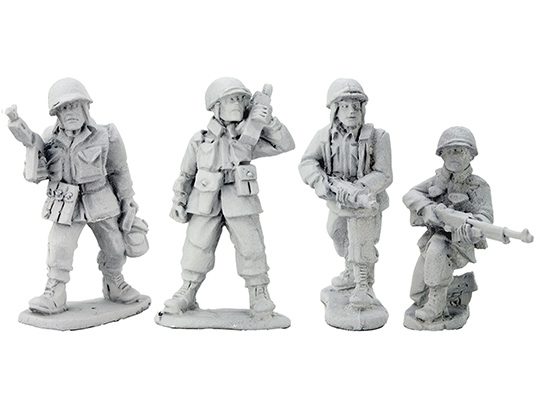 Artizan’s Mike Owen has been busy creating new figures, perfect for use in the later part of WW2. These new US Infantry options will bulk out an existing force or, perhaps, might inspire a new one.

Cast in metal and mostly one part (we’ll point out any that aren’t), each of these six codes can be purchased for the very reasonable price of £6 ($8.50 US) per pack of four and the figures are 28mm.

The bulk of the range wear the M1943 uniform, which means they’ll fit really well into most of your European gaming from late ’44 to ’45.

SWW375 – US Infantry Commanders (Late War)
First up are some characterful options – a pair of Officers, a radio operator that comes with a separate radio pack, and a medic loaded with kit.

These figures are a very strong start to these new codes and a lot of details here will make these exciting and useful additions to any US tabletop army.

Whilst adaptable to any tabletop setting, this pack dovetails nicely with the Sarissa Precision MDF ‘Command Post Set’, from where the figures can survey the battlefield (and the radio operator will find a much-needed chair!)

SWW376 – US Infantry with Carbines (Late War)
The standard Infantry here have M1 carbines and, though they are far more basic sculpts, they still look good next to the Commanders.

We managed to get a brief word from Mike about some of the figures and he told us that he had “tried to keep them to moving/covering, firing packs.” That’s apparent here – the men are pushing forward and firing while on the move, from the hip.

SWW377 – US Military Police (Late War)
Bringing some variety, these MPs are another nice addition, building out an increasingly complete range (it’s worth mentioning that there are already other codes in Mike’s WW2 US range including some late war rifles) and Mike told us these new figures were “an opportunity to add in some character sets, like the MPs, who are possibly disguised Germans.” Well, that’s even more options!

SWW378 – US Recon/FO team moving
There’s more detail to be found on this set of figures. This set would be fantastic to use in the Bulge, perhaps as a dismounted recon team for the Battle of Lanzerath Ridge. One of the arms here is separate, allowing for a better advancing pose and we are rather keen on the chap marching wearily with his Thompson (shown in the spin).

“Looking at a lot of the photos, especially those of the 3rd army in the Bulge and on into Germany,” Mike tells us, “a lot of the infantry had dropped their webbing. It was replaced with lots of bandoliers and grenades on pockets, so I thought they would make interesting models.”

And he’s not wrong – There’s always something appealing about the sight of WW2 figures ready for prolonged action and the amount of gear added to these ones is impressive in its amount and its detail.

Something we really like about packs A and B here is that they contain a wide variety of poses – firing from the shoulder all the way down to prone and reloading – making for a truly dynamic group of figures doing grunt work on the tabletop.

The weapon options are varied too, covering rifles through to the BAR that is in the hands of the crouching Marine shown in this spin.

These six codes have some cracking figures in them and will add real character to your late war force thanks to the variety of poses, options, and the hefty amount of gear these men are lugging around with them. Good stuff!

Soldiers of Napoleon with Warwick Kinrade and Andy Fox