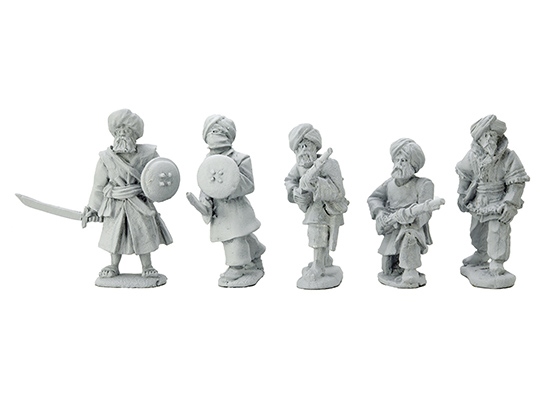 NFW 1008 – Afghan Irregulars Command II
We’re looking at command figures first. These add to Artizan’s already released Afghan Irregulars command set but they look more suited to summer campaigning. Unlike in NFW 1001, there are none of their poshteen coats and one of the figures here also has exposed toes – not a wise choice in the cold of the Afghan winter!

No standard-bearer is included (there’s one in 1001) but a drummer, two command with swords and shields (two different designs included, one with a visible rim around the hardened hide), and one rushing forth with a pistol drawn are in this £6 ($8.50 US) pack.

NFW 1009 – Afghan Irregulars with Jezails
Also costing £6 (and everything else does except the last code we discuss), the iconic jezails are featured for the first time in Artizan’s range here. Previous releases were all muskets and swords so it’s good to have these as an option but we have to say that these are perhaps the least satisfying of the new releases.

It’s not that they’re bad – they look just fine along with the rest of the range – but Artizan’s metal jezails just don’t show the detail of these carefully crafted weapons as well as the plastic versions Perry Miniatures and Wargames Atlantic have released. It also looks like Artizan’s weapons are matchlock, or perhaps just have the obvious flintlock details missing – that isn’t a great fit for the Second Afghan War.

NFW 1010 – Afghan Irregulars with Muskets III
Adding to the two existing codes that already have muskets are these new codes. Again, the guns aren’t quite as refined as you might find in plastic, but we think these are Snider-Enfields. A good mix of poses are available between the now 12 figures available, giving you the chance to have models firing shouldered, from the hip, or down at a crouch.

NFW 1011 – Afghan Irregular Swordsmen III and NFW 1012 – Afghan Irregulars Swordsmen IV
These two new lots of swordsmen come with the same shields as the command set – the previous codes had no shields so that’s a bonus. You can build four figures from each code and we can see players using them as Ghazi fanatics.

Most of these (and the figures in the other codes) wear turbans; if you’re wanting to get specific in your tribal accuracy it’s worth noting that turban ends hang down to differing degrees through the various models so you’d need to do some filing if your tribe tucks them.

NFW 1013 – Afghan Irregulars Gun Crew
The final code is £4.50 ($6.50 US) and comes with three figures – a crew for use with your big guns. The notable detail here is that one is wrapped up cosily, looking well suited to the winter, which is a bit of a break from the rest of the figures in these codes.

Conclusion
Overall, these codes will bring yet more options to anyone gaming during the Second Afghan War and beyond. They’re usable well past that conflict too, we reckon. As you can see from the comparison shot below they fit well with Perry Miniatures (right) and Wargames Atlantic (left) plastics and we always welcome yet more choice and variety.