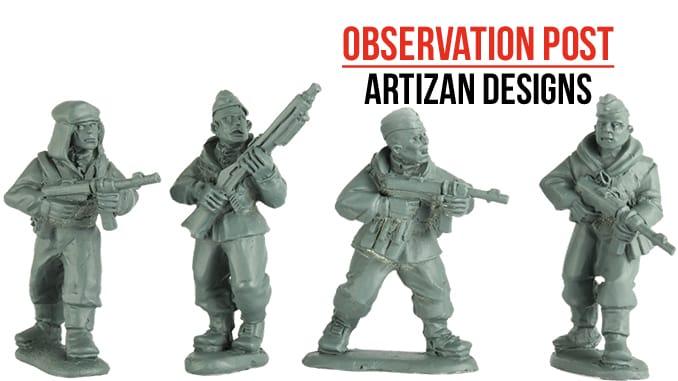 Artizan Designs continue to support their World War Two range with some specialized packs of miniatures. One of the more recent ones is a pack of Soviet scouts with captured German small arms.

The fighting on the Eastern Front saw both sides making use of captured weapons. As the fighting in urban environments and compact battlefields progressed, the dominance of the rifle gave way to the short range firepower of the sub-machine gun. Germans troops came to prize the PPSh for its simple, rugged construction and rate of fire. Paradoxically, the Soviets enjoyed the MP40’s elegant design and workmanship. Other reasons exist of course, such as the ability to survive behind enemy lines by using their weapons, the kudos of having captured a piece of enemy equipment and the perceived inadequacies of their own weapons.

This pack consists of four 28mm figures, all in the standard Soviet camouflage suits that were worn by scouts.  Three of the figures are armed with the MP40 machine pistol, with the use of German pouch equipment for the magazines. The fourth figure carries an MG42 light machine gun, one of the finest LMGs of the war and capable of throwing out a stream of bullets as fast as it can be fed.

Each of these figures is fairly ‘chunky’ and well sculpted. Mike Owen’s sculpting style is perfect for those looking for accuracy and ease of painting, with plenty of detail that would suit the ‘base colour and wash’ approach.