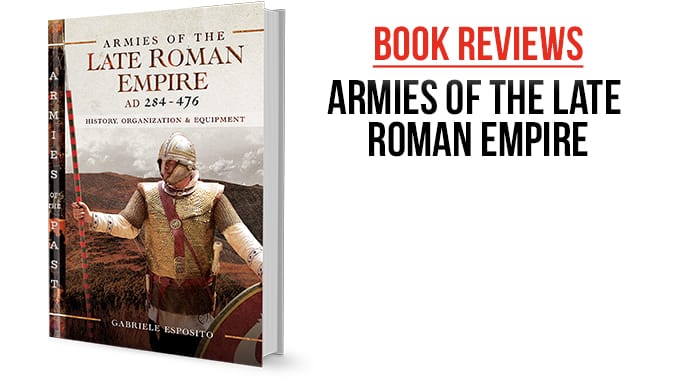 Every once in a while a book comes along where I go “Wow!” – this is one of them. Mainly because of the splendid illustrations, scores of high quality colour photos of reenactors in authentic Late Roman gear (“uniforms” does not quite sound right). Plus pages upon pages of shield designs, in full colour. This book packs a lot of bang for the buck.

And it will be a great help for wargamers wishing to recruit new units, trying to keep the crumbling Roman Empire a going concern on a tabletop. Not only as a visual guide, but also as a comprehensive overview of the organization of the army, and the challenges faced. Historians might disagree with some parts of the text (the decline of Roman military might is a fertile field for endless discussions), but as an overview, “Armies of the Late Roman Empire” is not to be scorned.

Having said all this, here comes a caveat: the photographic images in Esposito’s book do show “typical” soldiers of the period, in a modern interpretation by a happy few enthusiasts. This brings a certain repetition of the same outfits again and again, maybe not fully encompassing all the varieties found in the Western Empire over the two centuries. So other sources might help. Also there is the old niggle that reenactors tend to approach the theme with a “pick’n’mix” attitude, creating a full costume out of parts that may never have been worn together in historical reality … but this holds true for any modern illustration. Though the outfits on display here might be too pristine, have occasionally (and obviously) just been taken from a suitcase, and are at times displayed before an anachronistic background.

So, recommended? Definitely, as a primer, and as a visual reference that’ll keep you painting away for a few hours. And while it may not be the most exciting read, the text being matter-of-fact throughout, it certainly is accessible.

One thing that I sorely missed was a glossary – while I know my pilum from my gladius, Esposito’s frequent (and often exclusive) use of Latin terms can be cumbersome for those not 100% up on their Roman military language. Especially if you just dip into a chapter.