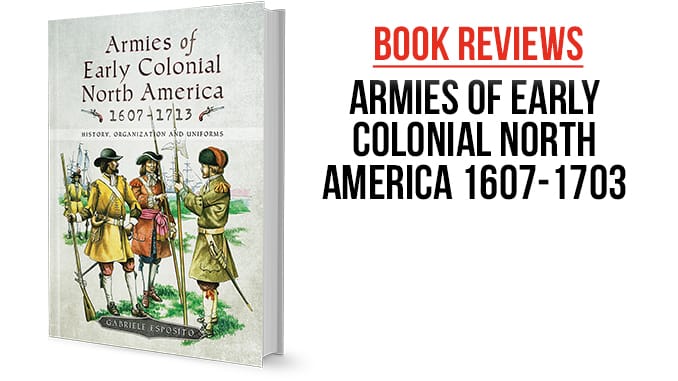 In these days of hyperbole and over-marketing, it isn’t often that a book with an understated title crosses this reviewer’s desk. But Gabriele Esposito’s Armies of Early Colonial North America 1607-1703 fits that bill; beneath the matter-of-fact title lies a wee gem of a book that is better than the sum of its parts.

On the face of it, Esposito presents a selection of black-and-white and colour plates to make 17th Century uniformologists very happy; but the accompanying no-frills text also grabbed my attention. Esposito authors a narrative military history of the colonial period in America, from the origins of the various colonies through their growth and development, including short sections on their military organizations. He begins in 1607 with the establishment of the Jamestown Colony and stops at the end of Queen Anne’s War in 1713 with stops along the way for most of the major conflicts, including Bacon’s Rebellion, King Philip’s War, and the expeditionary forces that arrived when the continent became a contingent theatre of European wars in the later 17th Century. Esposito’s focus is on the European forces involved in the American colonies, including some pleasing coverage of the Swedes and Dutch. Some token Indians are included because they were the major military power for most of this period – Esposito should have done much more or omitted them altogether. He concludes with a useful appendix on Warfare and tactics in colonial America and an equally valuable, if short, bibliography for further exploration.

I can’t praise this book highly enough. It is an interesting read, if a bit dry at times, and Esposito gives you all you need to know for understanding the basic story of the colonies, and the nicely drawn maps help with that. The plates are uniformly excellent, with some of them thoroughly annotated for good measure. Esposito has written a handy primer for military historians, and for wargaming the 17th Century colonies this is a great starting point that should not be missed.