Armies and Enemies of Louis XIV Volume I – Western Europe 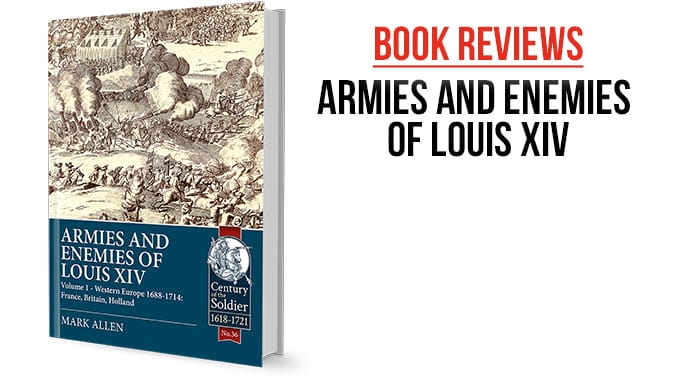 The latest book in Helion’s Century of the Soldier series is Mark Allen’s survey of Louis XIV’s armies and those of his main enemies between 1688 and 1714. Allen originally published his work in Wargames Illustrated over a decade ago, so it is good to see them collected in this format. Armies and Enemies of Louis XIV is split into five chapters. The first describes the War of the Grand Alliance, fought between 1688 and 1697, which is followed by detailed expositions of the Dutch, British, and French armies in that war, and the French army in the War of the Spanish Succession. In each chapter, Allen breaks down infantry and cavalry tactics and basic organizational units, though why he does some of this in the introduction is unclear.

Allen first surveys the Dutch organization, arms and equipment, dress, and flags. He appends extensive lists of regiments in the army and commentaries on the outstanding colour plates for uniforms and flags (also illustrated by Allen) that accompany the text. The Dutch were tactical innovators, according to Allen, but their army failed to achieve consistent success. Nevertheless, they were also doughty fighters that could be relied on, especially in rear-guard actions. Allen follows the Dutch model with his chapters on the French and British armies. Each had their own organizations and methods, which keeps Allen’s structure from becoming repetitive. However, it was not clear to this reviewer why Allen included the French Army in the War of the Spanish Succession, a conflict which surely deserves its own volume. Finally, Allen adds a useful but all too brief bibliography for further reading.

Allen displays a high level of research throughout Armies and Enemies of Louis XIV with excellent attention to detail. While Allen admits the information he has is incomplete, he does the best with what he has to produce something approaching authoritative. In addition, his superb colour plates are packed with visual information on uniforms and flags. Anyone starting a collection for this period, therefore, would be well-served by Allen’s efforts. What lets the side down, unfortunately, is Allen’s loose writing with sentence structures that are often convoluted and replete with misplaced commas, sometimes obscuring meaning. Some unforgiveable typos also litter the text. Nevertheless, minor irritations aside, wargamers and military historians interested in the period will gain much from Armies and Enemies of Louis XIV.