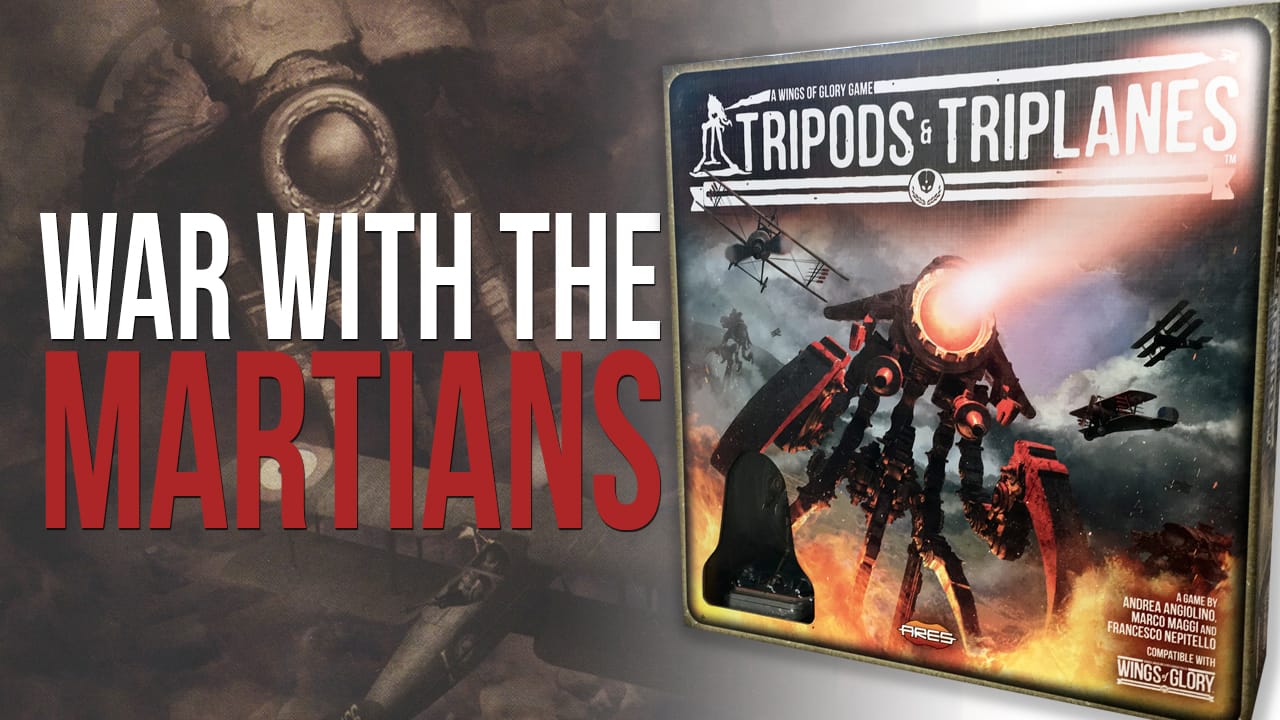 Ares Games have managed to take their Wings of Glory rules for World War One aerial combat and added something different, a H. G. Wells style Martian invasion just after the war. In Tripods & Triplanes, brave airmen take on invading Martian machines in a battle for the Earth itself.

The sturdy box has a window wherein you can see an example of a Martian tripod. Lifting the lid of the tough box, complete with some evocative artwork, the first item to discover are the so-called ‘Locust’ Martian Tripod, in a clamshell style box. Fully painted, the miniature comes on a plastic base, and with a set of cards for game use, including maneuver, damage and action cards, plus game stat cards and a full colour cardboard base. The first level of game components is a punchboard full of double-sided tokens, printed in full colour, plus range and movement rulers.

Lifting the punchboard brings us to the rulebook. This is a 31-page softback book, with clearly laid out rules, full of diagrams examples of play, a history of the Martian invasion and the use of the airplane and tripod consoles included with the game. The standard rules contain the basics of play, followed by optional rules to add additional layers to the gameplay. These are mostly concerned with the use of different types of unique or specialist weapons in use by both Martian and Mankind, plus the effects of terrain. A series of scenarios are also included, and the games compatibility with the Wings of War system.

The next set of punchboards are the Tripod and Triplane control panels, plus various double-sided 2D terrain pieces. Inside a very well-designed plastic tray are more game system cards, plus square plastic tokens. There is also a French Nieuport fighter ‘plane model, with the addition of anti-Tripod rockets. The game cards for the aircraft are included, as is a flight stand with the relevant markings for game use.

One think that is perhaps missing is a gaming surface to play the game upon. This is a shame, as all the other components of a great game are already here. The 2D terrain is crying out for a similar playmat to make the game even better. Perhaps the intention is to attract gamers who already have mats or have previously invested in the Wings of Glory game system.

This is a great concept, wrapped within a set of high-quality game components and some interesting rules. The ‘missing’ playmat is a problem, but a not insurmountable one. Most gamers will be able to rustle up a suitable mat and terrain. However, the fact that this is intended as a standalone game makes its omission a bit of a shame.