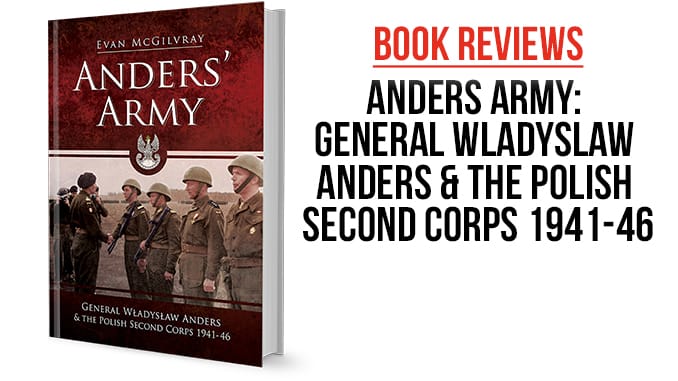 This work offers a comprehensive summary of General Wladyslaw Anders entire military career, information which is key to understanding how Polish 2nd Corps was forged from the remnants and survivors of twice-invaded Poland.

No enthusiastic eulogizing here: McGilvray is often critical of Anders political decision-making and his stubborn (though completely understandable) resistance to compromise with the Soviets. Of course, such political intrigues were at the centre of the creation of 2nd Corps and its subsequent disposal, deeply affecting interaction with the other allies, Polish 1st Corps and Sikorsky’s government-in-exile.

In Anders defense the author makes it clear that the line between soldiering and politics has always been blurred (or arguably non-existent) in Polish affairs, and how compromise might have constituted a betrayal of soldiery, populace, and Poland itself. He is equally critical of the mercurial and cavalier treatment of Poland and the general disregard for its eventual fate amongst the western Allies.

For the wargamer, there is a rich seam of military activity to mine, from the strategic overview, through the unique challenges of fighting against the grain of Italian geography, right down to the actions of individual squadrons and platoons of 2nd Corps. There are also suggestions for actions fought by the retreating Polish army of 1939, (with more than enough local success to provide balanced scenarios), and even some potential material for post-war ‘what-ifs’.

Unfortunately there is only one map (delineating the positions at Monte Cassino), and photographs are predominantly limited to parade ground shots. The reader will have to look elsewhere for unit insignia, uniform and equipment details or ORBATs.

Generally this is a valuable addition to the increasing corpus of material translated from Polish sources, offering a greater understanding of the nature of Polish military thinking, with plenty of potential for both wargamer and historian.