An Alternative History of Britain: The English Civil War 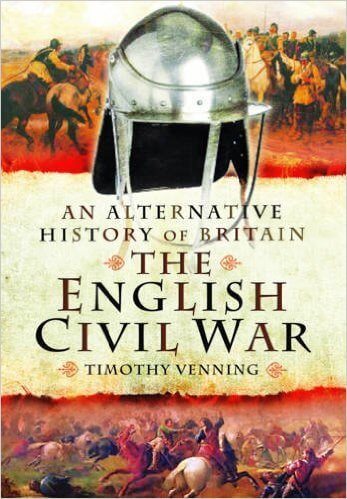 Excerpt from the back cover of the book:

“With hindsight, the victory of Parliamentarian forces over the Royalists in the English Civil War may seem inevitable, but this outcome was not a foregone conclusion. Timothy Venning explores many of the turning points and discusses how they might so easily have played out differently. The author analyses the plausible possibilities in each thread, throwing light on the role of chance and underlying factors in the real outcome, as well as what might easily have been different.”

Mr. Venning’s book follows his other titles in the ‘Alternative History’ genre, as he lays out very convincing details of how King Charles I and the Royalists could have won at various times during the years of the First English Civil War. Being a Cavalier myself, I wish it would have been so, and some things are quite plausible; yet, being a realist, I know there are aspects that just would not work. This discussion however, could go on for years (and has), though probably in the UK it does not rival the US’s more popular “If the South had won the American Civil War…”

The book is a very good read as the author convincingly points out situations where the Royalists could have tipped the scales militarily throughout the years of the Civil War. Other aspects are examined as well, such as the war in Ireland and the Royalists’ outcome there, as well as how circumstances could have favored Parliament and the New Model Army at different phases of the war.

For the wargamer, this book provides circumstances that could lead to theoretical battles at every phase of the war, since different outcomes presented are based on plausible possibilities. Of course, the easiest and simplest of these ‘what if’ scenarios to game would be those where a battle could have been fought a second day: second day of Edgehill; second day of First Newbury; second day of Second Newbury. Other scenarios might include: what if the King had retained the 2,000 odd veteran cavalry that were sent off with Lord Goring (in a huff) to the West prior to Naseby; alternately, what if the letter (orders) made it to Goring and he actually marched to join the King prior to the battle (which would’ve been a big help against Cromwell’s cavalry command on the Royalist left wing!). The possibilities are endless, and many are as nicely outlined in the book for the entire war.

While the book covers many ‘what if’ aspects of battles and campaigns, there are no orders of battle or such, so the wargamer would have to consult one of the myriad of books or scenarios of battles they want to refight or alter in order to play a ‘what if’ battle. However, this should be quite an easy task, as the English Civil War abounds with many books and scenarios detailing battles.

This book is recommended as a good read, since it provides some provoking thoughts about the battle possibilities. For creative wargamers, An Alternative History of Britain: The English Civil War, introduces a number of ‘what if’ battles to game.