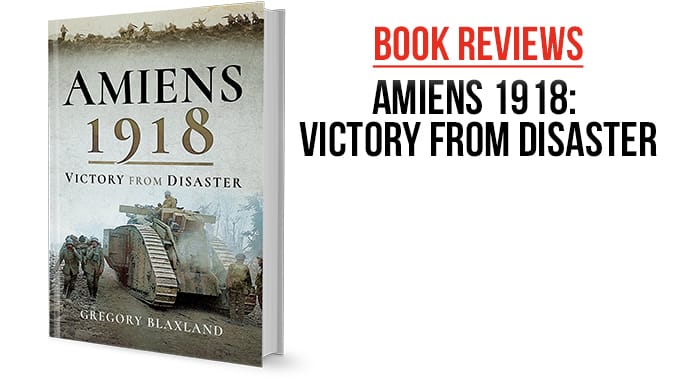 This book is another of Pen & Sword’s stealth publications. It was written for the anniversary of the battle, but the fiftieth not the hundredth, it is a reprint of a book first published in 1968. There is no updated foreword or introduction and nothing in the blurb or the cover mentions the fact it is a reprint, the only clues being the first sentence of the preface which reads “I feel I should make it clear from the start that I played no part in the events I have tried to describe.” and a throwaway reference on the dustjacket to the author’s death in 1986. The dustjacket is also disconcertingly similar to McWilliam and Steels book “Amiens 1918, the last great battle”.

I have a copy of the 1968 edition and on a superficial check can find no updates. The book has 274 pages, a comprehensive index, sixteen pages of photos and numerous maps. The photos are very old school, there was something about them that made me check the publication date, plenty of portraits of generals and field marshals though with some of Tommies, poilus and stubblehoppers. The text has the look of being reproduced from the original rather than reset but it is perfectly legible.

That said, this is an interesting book which is a refreshing change from “Forgotten voices of . . .” as it covers the battles at all levels rather than filling pages with quotes which don’t tell us much. Blaxland covers everyone from the king and Clemenceau to lone soldiers in foxholes and trenches. It is actually quite interesting as a comparator for modern books as it deals with the subject matter in a warmer way as the author knew and served with many veterans of the war. Throughout there is a definite pride in the achievements of the BEF which is usually absent from more modern books, which are perhaps trying to be more balanced.

The book is slightly mis-named as it doesn’t just cover Amiens but the whole of 1918, from the disasters of the Spring through to the triumphs of the Autumn. Blaxland is very even handed in his appraisals and, surprisingly for a book written in the 1960s, is quite defensive of Haig. It also contains a number of interesting details, for example listing the logistical problems of taking a trench over from the French rather than another BEF unit but also mentioning the advantage that the French were happy to leave wine, coffee and food behind. These are the kind of details missing from most recent books as they are the sort of thing rarely written down but passed on in chats in the mess or pub.

I thoroughly enjoyed this book but it is definitely written for an audience: those who fought and those whose fathers and uncles fought, it is a celebration of their sacrifice and achievement. From a wargaming point of view there are plenty of maps, the author is clear and concise in his terminology and the reader can easily follow the progress of the battles both at ground level and in the conferences at Chantilly and Montreuil. I would heartily recommend this book, with the caveat that the research is fifty years old and it contains nothing the 1968 edition does not.