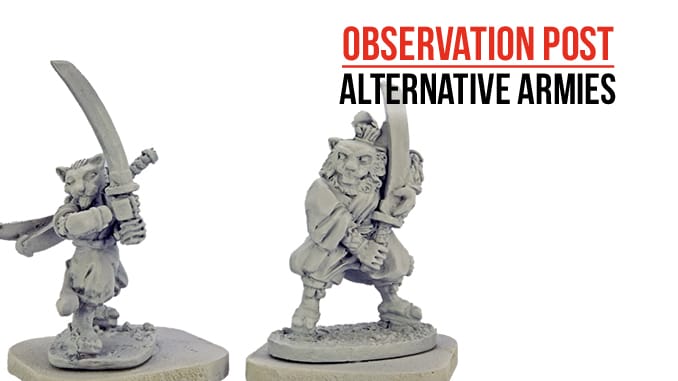 Alternative Armies is one of those companies that worries less about convention and aims to offer something suitably, er, alternative. And what could be more alternative than a range of Feline Ronin Warriors?

The two packs sent for review are from the new Kitton range, we have Kitoka Ronin and Kitoka Ronin II. On the surface, these could be dismissed as novelty figures, but a closer inspection shows that these feline warriors aren’t ‘funny animals.’ Instead, each of the figures wears accurately depicted Japanese style clothing and armour, and wields the traditional weapons of the Samurai. The posing of each figure also matches stances and positions associated with the classic fighting poses of the Samurai-era. Each of the four figures in each pack is armed and equipped differently, making each one a character in its own right.

The third pack is somewhat prosaic in comparison, but would be useful nonetheless. Entitled ‘Reluctant Brigands’, the pack contains four characterful figures, labelled as Human Sea Captain with Sword and Coin Bag, a Human Forester with Long Bow, a Human Lumberjack with Axe and a Half-Orc Bandit with a Crossbow. That’s already an interesting adventuring party, but each one would work well as an individual character figure. These are nicely done fantasy figures, ready for adventure above or below ground.

These are just three packs from a company who specialize in offering something different in a gaming industry where the safety of the ‘same old’ is remarkably prevalent. The website is well worth a look, so, for more information, visit www.alternative-armies.com