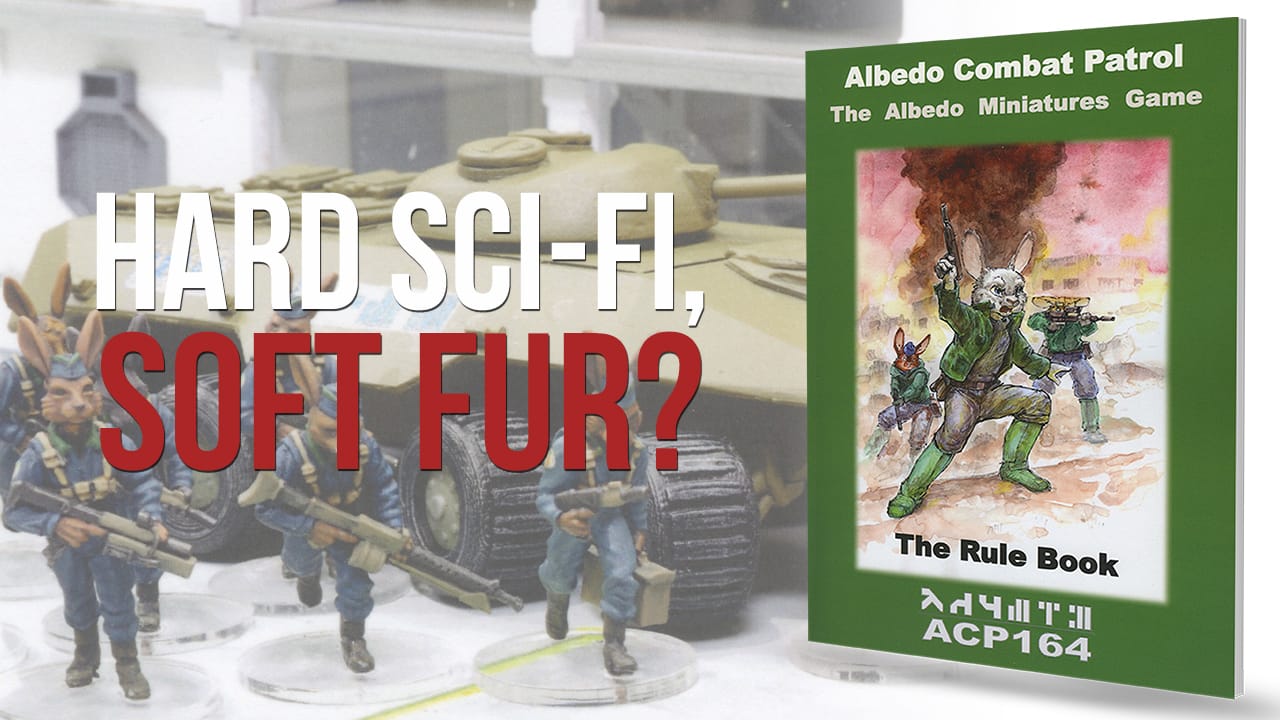 After a successful Kickstarter campaign, Sally 4th have released their Albedo Combat Patrol miniatures game to the retail market. This is an A4 114-page softback book, printed in full colour. Based upon a ‘hard’ sci-fi setting with genetically engineered anthropomorphic animals as the main protagonists, the book reflects the wars between two of the main factions, the egalitarian EDF and the more fascistic ILR.

The book begins with a fairly imposing contents list. However, this shouldn’t put readers off, as all the points are numbered and most of the rules are offered in fairly short ‘bursts’. There are also a number of tables and supporting examples which are referenced, allowing for rapid retrieval of information during gameplay. The first set of rules is entitled ‘Quick Start’, which should be considered the ‘core’ rules system. The rules begin with an explanation of the different attributes used in the game, and the use of the various card decks, the Activation and Action decks. There are two decks of Action cards, one for the EDF and the other for the ILR factions. These contain all the in-game data for the troop types available. The Activation deck consists of red, black, re-roll and re-shuffle and some other special cards. A D6 is rolled per leader, to provide a number of ‘orders’ which may be used. The various aspects of the Action cards are fully explained, and weapon data is shown on two charts.

The rules make great use of colour examples alongside the text descriptors. In this way, the gamer can gain not only a visual insight into the rules but may also return to the pages whilst playing.

Having read through the Quick Start rules, the rules contain a number of ‘try out’ scenarios to practice what has been learnt. Once the rules are clear, you may go on to the expanded version of the rules. These provide additional granularity to the game, and persists in providing clear textual and visual examples. The transition to the next ‘level’ is simple, especially as the same mechanics are in use with the cards providing the driving force. The uses of cover, concealment, buildings and other aspects of the tabletop are covered.

The remainder of the book introduces various new and optional rules, providing a range of new gaming opportunities within the game universe. The rules for vehicles are also here, some of the most detailed but well-explained ones you could ask for.

Finally, we have a useful scenario generator covering a whole range of options and some equally useful reference charts to once again speed up cross referencing.

This rulebook has many useful facets that really aim to support the gamer. My only criticism is the use of some tough but non-glossy paper to print upon, there is an awful lot on every page, plus the cards are rather ‘busy’ to grasp until you have used them a fair number of times. As a concept, the game world is interesting, the rule system detailed and the actual gameplay appears interesting.