Alan Perry Tells Us About Some Of His New Napoleonic Figures 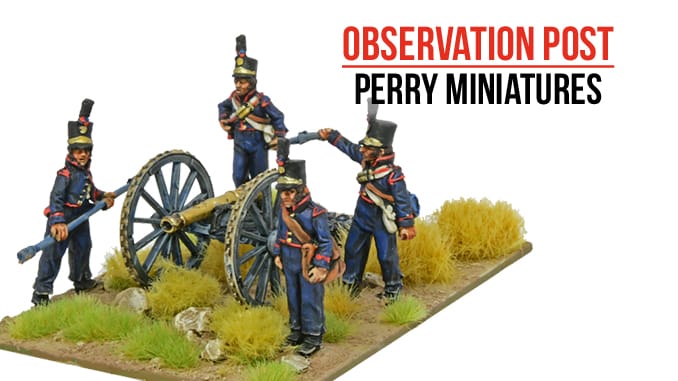 Below, for your spinning pleasure, we have two new and one forthcoming Napoleonic figure packs by Perry Miniatures. We asked designer Alan Perry to tell us a bit about each pack, beginning with the French Foot Artillery set.

Alan Perry: This is good for 1808 to 1813/14, so mid-war French artillery that will go nicely with our forthcoming plastic French Infantry box set. It’s an 8-pounder gun, the ‘firing’ one in this case, although we also have ‘aiming’ and ‘loading’ versions.

AP: This next gun is a Portuguese 6-pounder, on a bracket carriage. Most model guns are mounted on single block carriages, but I went for the twin, or bracket, mount here. It was in use between about 1807 and 1814. A ‘loading’ set is also available.

AP: This is a limbered Spanish 8-pounder* pulled by a mule team. Most Spanish guns were pulled by mules, with the muleteers in their distinctive red caps, brown capes and lots of buttons. They were notoriously nasty and carried big knives to prove it.

This set is out next week and later we’ll be making two additional mule teams available in the range.

AP: There are two packs here – ‘Wellington and staff around a map table (Peninsular War)’ and ‘Mounted ADCs’.

This is something I’ve wanted to do for a long time. It’s not based on any particular painting or anything, it’s essentially just some men looking at a map! They are all high-ranking British officers, plus Brigadier Miguel Ricardo de Aleva – a Spanish liaison officer.

The officer having just dismounted is Stapleton Cotton who was in charge of the Light Cavalry in the Peninsular. John Morris (Mystic Spirals) has done a great job of the paintwork, including the leopard skin shabraque on Cotton’s horse, and if you look closely you can see that the map is actually Salamanca – you might just make out the two tell-tale ridges. I like the ‘comb over’ on Coles head too, although on his portrait you can’t see the back of his head, you can tell he was sporting one. I sculpted that on the figure and luckily John picked up on it.

The figures are shown in their ideal position, but there is a bit of room for manoeuvre with things like the chest – which is a copy of one Wellington actually used by the way.