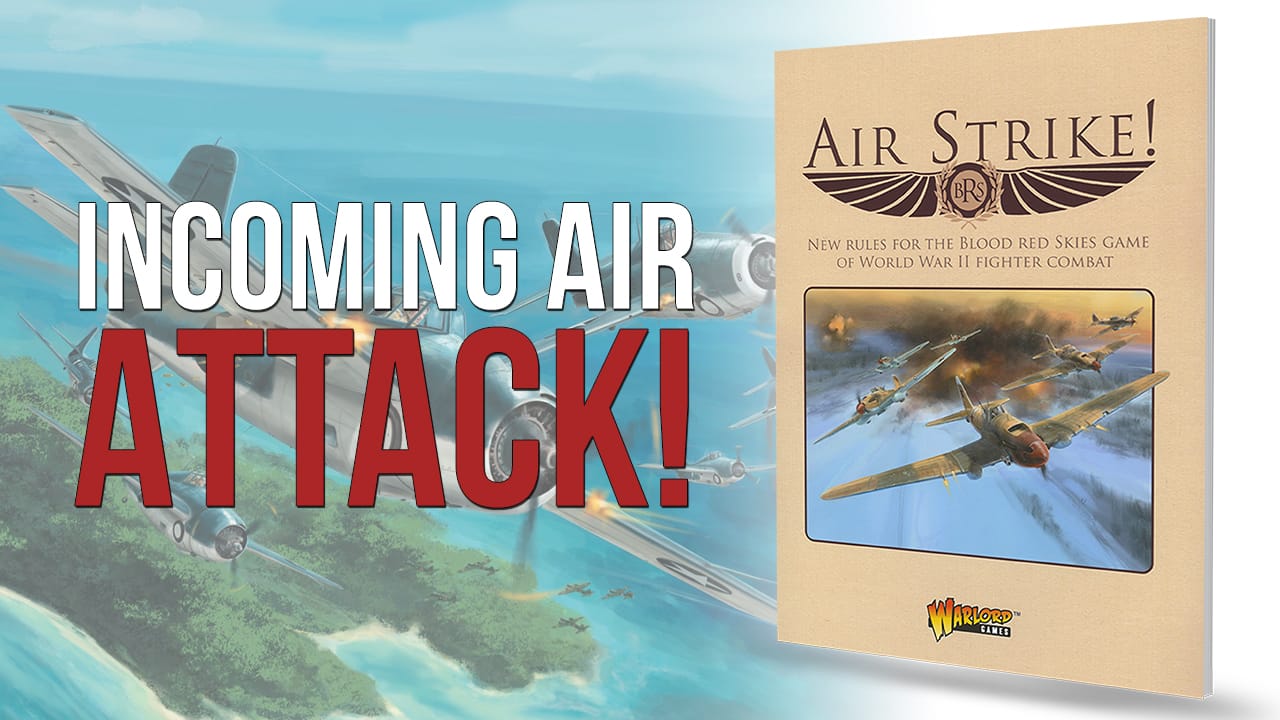 Warlord Games have released Air Strike!, a set of new and updated rules and scenarios for the popular Blood Red Skies . This is a 76 page softback book, with fold out target cards and photcopiable resources.

The original Blood Red Skies rules have been updated and expanded in the course of the first couple of sections of this book. Many of the rules have been altered as a result of further play testing and feedback from many players.

The next section contains new rules for Aces, optional rules for using the Action Decks in a different way, the use of Traits, bombers and multi-engine aircraft and the use of turrets during the game. Bombers have been a desired aspect of the rules from the outset, and these rules make them much easier to use.

The rules and suggested profiles from the MIG Alley boxed set are repeated and expanded here, with a list of aircraft used during the Korean War of the 1950s and a number of aircraft have been provided with game data. The next section gives full details of the new Air Strike! rules themselves, complete with an explanation of the new Target Cards, examples, the effects of Defensive Flak, attacking ground and sea targets and even the use of torpedoes and dive bombing tactics.

The rules for running tournaments and competitive play are outlined, and a handy list of who used which aircraft under ‘Lend-Lease’ is given, allowing for a number of other national squadrons being assembled. Next come the scenarios, with updated versions of the five original ones from the boxed game and seven brand new ones that more closely follow the Air Strike rules themselves. After set-up rules, a set of charts for theatre and doctrine cards is included, allowing players to fight across pretty much every part of this worldwide war. Specialist scenario rules, and the scenarios themselves follow, all outlined in plenty of detail and making them a useful set of ‘pick up and play’ instructions. The new scenarios focus upon intercepting and running a force of bombers on typical missions of the time.

Towards the end of the book there are photocopiable versions of the various new cards outlined in the rules, three pages in total, plus a handy index and a quick reference sheet. The front and rear covers of the book itself are also resources, with fold outs of the new Target cards which may be copied or cut from the book without ruining the actual covers themselves.

With updated and new rules, this is a useful book for those looking to add more to their games of Blood Red Skies. The writing style is clear and concise, the rules themselves are consistently well explained and the overall look of the rulebook is accessible and welcoming.