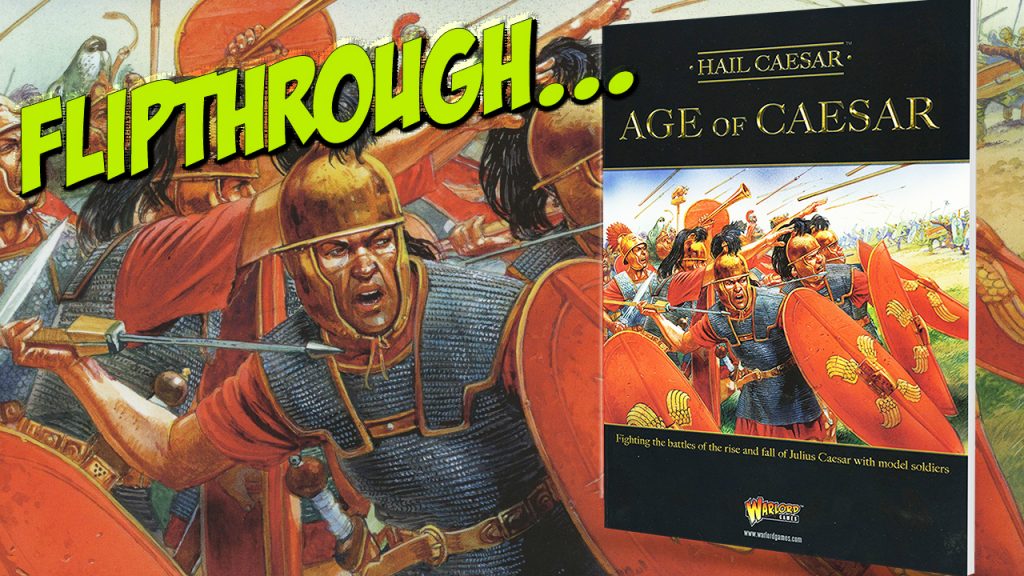 Warlord Games have recently released their latest supplement for Hail Caesar, a softcover guide to the Age of Caesar, dealing with the arguably most prolific period of conquest in Roman Imperial history.

Age of Caesar is the latest supplement from Warlord Games for their Hail Caesar Ancient era mass battle miniatures game.

We begin with a historical introduction to the Roman World into which Julius Caesar was born and was to rule.

More history focuses on the man himself and we learn about Julius Caesar background, before moving on to details of Caesar’s army, followed by a section on ‘Fighting Hail Caesar with The Romans’ – which really means Caesarian Romans.

As with other Hail Caesar supplements one of the prime objectives of the book is to channel the make-up of our miniature armies to the specific period covered in the publication, and we are given the stats for a Caesarian army, some of which are included in the Marian Romans Army List in the existing Biblical and Classical supplement book, some of which are new.

In an introduction to the next section of the book we are told that we are going to be presented with “five scenarios of representative battles that occurred at significant junctions in Julius Caesar’s rise to power.” There is also a campaign mechanic introduced here for rewarding Roman players with ‘Triumphs’ for winning the battles when played as part of a campaign.

The remainder of the book (a further 50 pages) then proceeds to present the scenarios in the form of history, followed by the Forces and Army Lists Deployment, Victory Conditions and Rules and concludes with a Battle Report of what occurred during the game when the authors (and friends) played the scenario.

After the first scenario ‘Caesar in Germany – First Steps to glory’ we move onto ‘Caesar in Gaul and Slaughter on the Sabis’. For the Third scenario, we remain in Gaul and are presented with a scenario for one of Caesar’s most famous battles Alesia.

It’s worth noting that within the scenario section we also have ‘bonus’ information on Caesars enemies and a running side-theme on Rome’s Greatest Generals.

For The fourth scenario we enter into Civil War and fight the battle of Pharsalus against Pompy the Great.

There is a specific look here at Pompey’s Roman army with rule suggestions for playing with his Spanish Legions.

The Book’s final scenario sees Caesar’s army head over to North Africa and we are treated to a classy pun with the title ‘Would Juba’lieve it’ as Caesar takes on King Juba and co. at the Battle of Ruspina.

Age of Caesar continues in the mould of the three previous Hail Caesar supplements in presenting pointed army lists, and scenarios which can be linked to form a campaign based around the lead character. It’s history heavy and presents the Hail Caesar player with a clear environment in which to game the battles of Galus Julius Caesar.