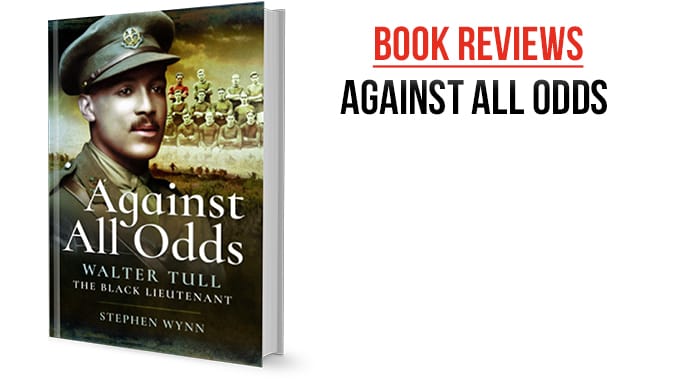 In Against All Odds, Stephen Wynn attempts to tell the story of Walter Tull, the first black officer to serve in the British Army. It is a daunting task with little evidence to work with, so perhaps it is not surprising that Wynn falls short. He is not helped, however, by a shocking absence of support from his publisher.

Wynn begins in Tull’s turbulent childhood before delving into his rise and fall through the footballing ranks. That career was cut short by World War I when Tull enlisted to fight and climbed up the ranks to become an officer. In March 1918, Tull fell victim to a German machine-gunner, having fought on two fronts and suffered through shellshock. In Against All Odds Tull is dead by page 47 in a 128 page book. The remaining chapters are comprised of lists of footballers who fought and died in the War; an annotated list of other black soldiers; an edited description of Tull’s Army Service Record; and descriptions of war memorials where Tull’s name appears.

The strongest sections of Against All Odds are Wynn’s rendering of Tull’s military service, and a selection of photographs of Tull. But like many of the battles in which Tull took part, Wynn’s biography is poorly planned and terribly executed, resulting in nothing short of a disaster. The author’s problems are that he lacks imagination and writing discipline; Against All Odds is replete with pointless meanderings; such as an early potted history of Barbados; six pages on a Tottenham pre-season tour of South America derived from a blog; a whole page on a ship in which Tull sailed once; and eight pages on other black footballers. Wynn includes few references, and Against All Odds gives the appearance of having been researched entirely on-line over a rainy weekend; eight websites, including Wikipedia, make up Wynn’s sources with no bibliography added. That is shoddy research when there are at least four books already published that narrate Tull’s life. Wynn also makes wild, unsubstantiated claims about why men went to fight, and adds amateurish off-the-cuff commentary, basing that on dubious assumptions, particularly his opinion on how to overcome racial bias.

Where Wynn’s publisher was in all this is as mysterious as Tull’s final resting place. It is obvious that Pen & Sword does not employ proofreaders, but now I wonder if they have an editor on the payroll. There is no editorial control exhibited in Against All Odds, either over the production or Wynn’s research and writing – this is a book with two headings for Chapter 8 and none for Chapter 7! Wynn’s digressions go unchecked, commas litter the pages like shell-holes in no-mans-land, and nearly 80 pages of lists and annotations arranged as chapters barely constitute a book let alone a biography. For military historians, there are a very few crumbs in Against All Odds; as a wargamer, nothing of interest caught my attention. Ultimately, Against All Odds comes across as a shameless attempt to cash in on the centenary of the Great War, and like that war no one making the decisions emerges with any credit.