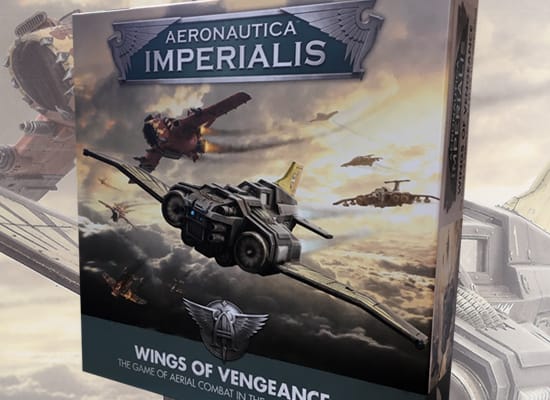 The Forgeworld design studio, part of Games Workshop, has provided 28mm ‘heroic’ scaled aircraft miniatures for the Warhammer 40,000 tabletop game for many years. These are resin, multi-part kits that look great but have had a high price tag due to the level of work undertaken to create them. So, for those looking to re-enact the aerial battles of the 41st Millennium, that’s where the new Aeronautica Imperialis: Wings of Vengeance boxed game comes in. So, let’s push the joystick forward and dive into the box!

Lifting the lift of the sturdy box, the first thing we discover are the frames of self-assembly aircraft models.  These are presented as plastic model kits which come with a number of weapon options. There are enough parts to construct two Imperial Navy Thunderbolt Fighters and two Imperial Navy Marauder Bombers, plus two Ork Air Waaagh! Dakkajets and two Ork Air Waaagh! Fighta Bommers. This makes for two roughly balanced forces, which can be configured with a number of different weapon types. Once assembled, the figures can be placed on their specialised bases, which have game related markings on the top of solid gray plastic bases, for fire arcs. The bases also have dials on them to record the speed and altitude of the aircraft. The aircraft are placed upon transparent poles, which slot into the bases on one end and have a ‘ball joint’ on the other, which fits into a ‘socket’ beneath the ‘plane models, allowing the aircraft to be placed in various ‘statuses’.

A Ziploc bag of six-sided dice nestles atop a piece of artwork taken from the box lid. Beneath that, we come to the rulebook, a 37-page softback book which covers the basic and advanced versions of the game. The rulebook is very well laid out, with easy to follow numbered points and pictorial examples. The use of artwork adds some suitable atmosphere, and the aircraft datacards, use of tokens, basic to Ace pilot skills and more are covered in plenty of detail. There are also scenarios and a useful quick reference sheet included. The same reference sheet may be found on the rear of the two Movement Diagram cards, which outline the possible manoeuvre options during gameplay, a useful tool.

Beneath the detailed assembly instructions for each kit comes a punchboard, full of double-sided tokens and made from the usual top quality, durable card. Next comes a double-sided paper map, with a devasted urban landscape on one side and the other a more open map with some type of facility just asking to be bombed. Finally, we have a sheet of decals that are designed to be placed on the completed and painted models, a nice touch for those who want to detail their kits.

This is a top-quality product which offers ‘all’ you need in one box. The use of inverted commas is due to the fact that there are already a number of expansion sets with more of the same or new aircraft to be added to game. And, after all, we are gamers, with a passion for the new and shiny! As core games go, this is a slick and fun seeming ‘game in a box’ that could be used as is or added as an extra element to Warhammer 40K or similar sci-fi games, enabling players to battle for air supremacy before a large battle or campaign game. Another winner from GW.