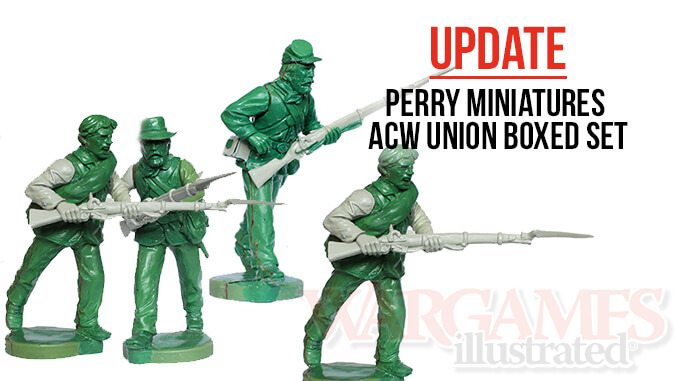 ‘3ups’ for the Union Skirmish frame.

These are ‘3ups’ examples of what you will e able to do with the small skirmisher frame that will come with the Union Infantry box set. There will probably be two of these frames in the box with the option or buying them separately or possible a dedicated skirmish box set (with different ratios), not sure yet.

This frame will have three torsos and a variety of arm sets which, together with the arms on the main infantry frame, will allow a wide mix of poses as you can see.

The bayonets are modeled fixed to the rifles to blend in with the rest of the figures in the box, but these can be easily clipped off if required.

Despite saying that the release of the ACW Union boxed set of plastics had ‘no release date yet’, this latest workbench update provides an insight into more development work, including ideas on sprue contents and layout. Will these great looking figures be with us sooner rather than later?

Here are a few samples of what you’ll be able to do with the union command, There will be one officer, two senior NCO standard bearers and a drummer. However with the parts on the frames you’ll be able to mix and match between the officers and NCO’s a fair bit to represent a wide variety of officers. The main officer wears the officer grade sack coat with pockets, however on campaign a standard sack coat wouldn’t be unusual on an officer. You may have to paint the shoulder straps on these coats though.
To complete this set there will be three figure skirmish frame. More on that later…

This is the office’s body used for a standard bearer. Other tanks and NCO’s are known to have occasionally use officer grade sack coats.

See our original post on these Perry ACW figures below.

Showcased at Salute 2016, these plastic Union Infantry in Sackcoats are planned for a distant but eventual release. Here’s a spin around of one of the current 3-Ups that may go for tooling.