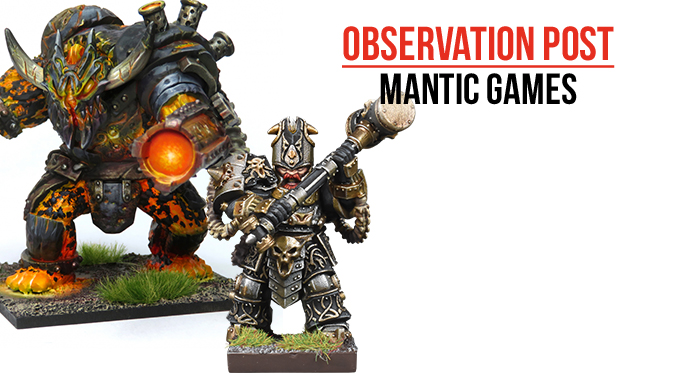 The “Kings of War” fantasy mass battle game has been around for a number of years but recently Mantic have launched the skirmish version of the game, known as “Kings of War: Vanguard.” This allows those of you who have large Kings of War armies already to pick out a few key models and play skirmish games, or for those of you who have never played the game before to “dip your toe” in the Mantic world, so to speak. Mantic aim to have all the factions currently represented in the mass battle game also supported in the Vanguard game as well, which brings us to their latest release, the Abyssal Dwarves.

Abyssal Dwarves are, essentially, evil dwarves, who look much like normal dwarves, (if there is such a thing) but with more skulls, horns and spikey bits on their armour and some pretty nasty allies to call on if needed. The Warband Boxed Set comes with two plastic sprues with enough arms, heads, bodies and weapons to make up ten warrior, or Blacksoul, dwarves and two “mutated mastiff” demon dogs. You have the option of arming your troops with axes and shields or a blunderbuss, to turn them into “Decimators’ instead. Also included is a resin model of a hero “Overmaster” dwarf, wielding a nasty looking two handed hammer, and a resin model of a dwarf firing a single shot version of the mass battle “Katsuchan” rocket launcher, that looks very like a harpoon! These resin models are extremely detailed and also come with separate heads and arms, which allowed the designers to create a much more dynamic pose. All of the models are full of character, excellently detailed and go together easily and with enough variety to please even the most chaotic amongst you.

If you already play Kings of War with Abyssal Dwarves, the best thing about this boxed set is the cards. Provided here are stat cards for the “Vanguard” game for all the existing standard units from the Abyssal Dwarf mass battle army, including Halfbreeds, Immortal Guard and slave Orcs. This allows those of you who already have an Abyssal Dwarf army to use selected figures from your army to make up your “Vanguard” faction, whilst also allowing those new to the game to pick up one or two additional models from the mass battle range without worrying about needing the Vanguard cards.

Mantic have promised to provide support units to be used primarily for the “Vanguard” game but which can also be used in the bigger battles as well. First amongst these for the Abyssal Dwarves is the Warband Booster boxed set, featuring three resin models; a Charnox, a Hexcaster and an Immortal Guardian. The Immortal Guardian is a cloaked dwarf wielding a two handed polearm who sports some incredibly intricately detailed plate armour. Despite his small stature, this model would be a joy to paint. The Hexcaster is a weird, many-legged monster that interestingly comes with a clear plastic support that gives the impression that the fiery hex it is casting is floating above its head. The Charnox is the troll sized heavy support weapon of this pack, who sports a rune encrusted flamer on one arm. All of these models need some assembly, but are not difficult to put together. Also included in this support pack are the not only the stat cards for these models, but also for the support units found in the mass battle lists, including Obsidian Golems and Gargoyles.

Finally, Mantic are also releasing single blister packs containing other troops options for your “Vanguard” force. First amongst these for the Abyssal Dwarves is the Infernox, an ogre sized fusion of Dwarf, steam driven Robot and Bad Attitude. This single resin model comes in five parts that go together very simply. The detailing is excellent, with every chain link and chaos motif clearly defined. The pack comes with stat cards for the Infernox itself and for the Dwarf mage, or Iron Caster, who no doubt made and controls him.

Also released this month are Ratkin Slaves that come in packs of four miniatures along with four stat cards for the Ratkin and one card for their Dwarf Slave Driver, who is not included. I really liked these mini’s as their poses are very dramatic and the mix of separate arms and heads allows you to really personalise your unit. Their card details the special ability of “worthless” meaning they are not worth victory points to the enemy. You have to love a unit of cannon fodder!

All in all, the Abyssal Dwarfs range is excellent. The miniatures themselves are well cast, certainly look the part and will reward careful painting. The breadth of unit types available, and the inclusion of cards for those units normally seen in the mass battle game, will give any Abyssal Dwarf player plenty of opportunity to personalise his force and have a good mix of Heroes, spellcasters, missile troops and specialists. The forces of “Vanguard” need to move over, as there is a new, and very deadly, faction in town.