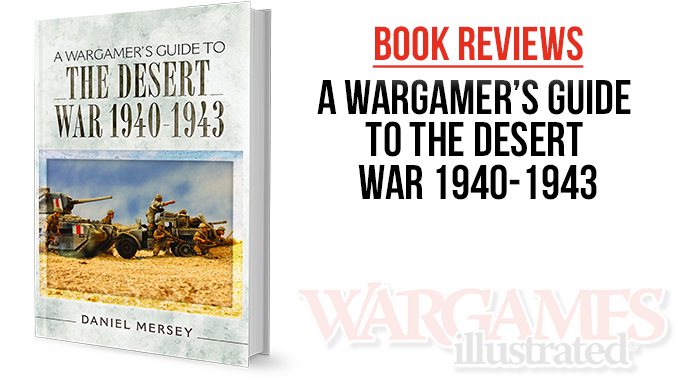 Afrika Korps, Desert Rats, Rommel and Montgomery, were all intrinsically linked with the fighting in North Africa during World War II. The theatre is also very popular with wargamers and modellers even if everything is yellowy beige, or at least appears to be! Many WWII wargamers will already know much about the theatre and maybe have even gamed it. If not, A Wargamer’s Guide to The Desert War 1940-1943, by Daniel Mersey, of Lion Rampant and Pikeman’s Lament fame, will help get you started. This is a 118 page book covering the wargame aspects of the war with the aim of providing the wargamer with an introduction into gaming the battles and skirmishes of the Desert War, according to the introduction.

Mersey’s book achieves what it states it sets out to do: this is an introduction into wargaming the Desert War, not a potted history, and it does not provide full schematics of vehicles or weapons. What it does is provide a brief summary of tactics, army structures, weapons, and considerations for the wargamer to take into account. There is even a discussion of available rule sets; fully twelve are covered in the book from squad level Operation Squad to divisional level Panzer Korps and everything in between. These are given a good, neutral overview and allow the wargamer to make up their own mind about which rule set to go for. After rules, there is also a section on models and who produces them, and like the rules section this is a very neutral section that allows the wargamer to come to their own conclusions.

I only have one real criticism of A Wargamer’s Guide to The Desert War 1940-1943 and that is the book is too short! You are left wanting more, even though the book exactly delivers what it sets out to do. The photographs of a variety of figures are wonderful but there are only four pages of them. I certainly think the small painting section could have been made larger with illustrations. Mersey has also missed Spearhead out of the list of rules, which is a shame as I think they work really well for Desert Warfare.

Overall, this is maybe the best primer available for the wargamer wanting to get started on refighting the Desert War. Mersey provides an extensive further reading section, which goes some way to alleviating my concerns on the book’s brevity! This book will not get you completely up and running with your Desert War games but it will excite you to begin the journey. I am even thinking of recreating my Italian Bolt Action force in a smaller scale, perhaps 10mm or 6mm. Currently, I am undecided on that point, so I am going to re-read the book for more guidance. If you have any interest in the desert campaign and want to look at playing it out on the table buy this book.