A Wargamers Guide To Marlborough’s Amphibious Operations (And Others In The Series!) 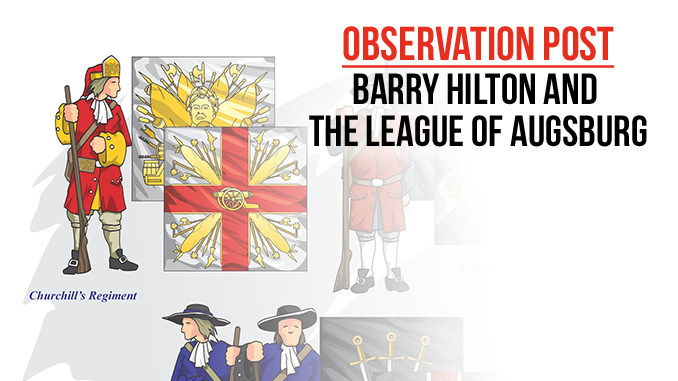 PDF Guides by The League of Augsburg

Born and raised in Ulster, I am no stranger to the Williamite wars in Ireland, and I have wargamed them in various scales, most recently investing heavily in a 10mm recreation of the battles of Aughrim and the Boyne. Anyone with even a passing interest in this period cannot fail to have heard of Barry Hilton, either through his popular rule sets, ‘Beneath the Lilly Banners’ and its more recent incarnation, ‘The War of Three Kings’, or through his many articles in this very magazine.

Less well known might be the PDF downloads he produces which are available through the League of Augsburg / Warfare Miniatures website. Each one focuses on a different aspect of the war in Ireland, and covers the Williamite and Jacobite forces at the Boyne, at Aughrim and at less well-known battles such as Windmill Hill. The PDF’s cover the historical background but are also full of organisational detail as well as colour uniform plates and flags. (Art work and flags by Clarence Harrison of Quindia Studios.)

I was already aware of these PDF’s, having downloaded and used them extensively when painting and organising my 10mm army, and so I was particularly pleased when this new product dropped into my inbox for review.

This 19 page PDF (is it a book?) is nicely laid out and presented in full colour. The first three pages provide a background to this rather unusual campaign, led by the Duke of Marlborough, to land troops by sea in Jacobite territory and seize the ports of Cork and Kinsale. The plan was to prevent French ships landing supplies there and hence further tighten the noose around the increasingly isolated Jacobite army. I have to admit that I was not aware of this aspect of the campaign and so this historical background was really interesting.

The next six pages are where these PDF’s start to come into their own. Each regiment involved in the campaign, on both sides, is detailed one after the other, including their movements, their strength, their commanders and so on.  The author even discusses how well they are armed and equipped and even includes hard to come by information about British marines of the period. These downloads are titled “A Wargamers Guide…” because this is exactly the sort of information that wargamers need when deciding how to grade troops on the battlefield and also when organising your battalions. I have a number of historical books on the Williamite war in Ireland and whilst they detail the movement of armies and the battles they fought, rarely do you find the sort of detail that Barry has produced here.

The remaining ten pages are colour plates showing the uniforms of each of the Regiments involved in the campaign, alongside their regimental colours. Although they are not Osprey standard, these colour pages are worth the cover price on their own. There is uniform detail here of an astonishing 45 infantry and cavalry regiments, all with their standards shown alongside each regiment. They are well researched and, again, just the sort of information wargamers need to know when painting their armies.

I have to admit, when I was first introduced to the concept of PDF downloads, I was sceptical. Being a gentleman of a certain age, and something of a Luddite, I always prefer to hold a book in my hand and flip through it, whilst the idea of reading everything on a computer screen did not appeal. My solution? I printed the PDF’s out and put them in a folder. If you have not had a chance to look at Barrys work, check out the available PDF files at https://www.leagueofaugsburg.com/shop/product-966.html

Below: Example pages from the League of Augsburg’s other PDF publications

The Battle of Windmill Hill

Williamite – Infantry of the First Wave