A Walk on the Wild Side: Playtesting and a review of Congo

Home » Review » A Walk on the Wild Side: Playtesting and a review of Congo
Previous Next
Mark Boam 30 Sep, 2016 0 comment(s) Categories: Review 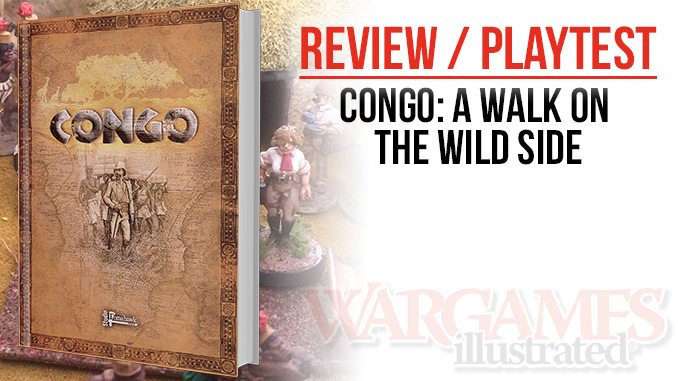 For men of a certain age, brought up on Saturday morning matinees of Johnny Weissmuller’s Tarzan and King Solomon’s Mines among others, a ruleset named Congo is bound to prick up their ears. Who wouldn’t want to fight off savage jungle warriors while grabbing fabulous riches and picking up perfectly formed Hollywood heroines? With that vision in mind, some like-minded men of derring-do gathered at WB3D Gamers to play some scenarios. The treasure we found, however, was not quite what we expected.

Congo is brought to you by the good folks at Studio Tomahawk, responsible for the excellent Muskets & Tomahawks, Saga, and Jugula rules, though Congo’s narrative construction resembles Muskets & Tomahawks more so than the other two games. Congo is a skirmish game fought with about 30 miniatures, representing the various factions that trod through the uncharted African jungles in the late 19th Century. As usual with the late Victorians, colourful characters abound from big game hunters to witchdoctors to newspaper correspondents who sent back salacious stories of an untamed and magical landscape full of wild animals and ‘savage’ jungle tribesmen. The mechanics of the game are quite straightforward with cards, movement sticks, stress markers, and simple dice rolls to get the action going – we detected a whiff of Saga in all this. Eight scenarios are included with the rules, of which we chose two to play in our test. We also split into two teams to play even though the rules are designed for single players, but we had no difficulties with our approach.

Chasing treasure was our first task in the Last Queen of Aksoum scenario. Here a group of adventurers occupied the centre of the table and they had to get away with a treasure, which unsurprisingly the other factions wanted for themselves. It did not take long to recognize that you need to get moving from the start with this scenario because by the end of Turn 3 it was apparent that the centre group would not make it out in time to win the necessary victory points. We resorted to an all-out shooting match, which had its own merits. For our second scenario, our host chose King of the Apes with a suitable 1970s ape model, looking suspiciously like a certain King Kong. All our factions entered from different corners of the table and through ‘loaded’ terrain sections filled with interesting surprises, though finding loot was infinitely more fun than being attacked by giant ants! Two of the factions were natives dedicated to defending a sacred circle in the centre where the ape lived while the other two wanted to capture the beast to entertain the gullible masses back in ‘civilization’. The fight was rather a violent affair with the aforementioned ape proving a perhaps too daunting opponent, assisting the natives considerably despite the victory points skewing against them.

Having completed the two scenarios, our reviews were somewhat mixed. The production and presentation are excellent. The scenarios are presented as newspaper items and looked the part along with every other element of the game. With proper terrain and well-painted figures, the look and feel of the game is quite outstanding. Moreover, Congo does not make you work too hard to get playing: buy a faction of a few figures, paint them, and then get down to some action. Nevertheless, as with most things, the gloss hid some irritating defects. The first is the perennial problem of the lack of indexing. There are those designers who eschew indices as unimportant, especially if the Table of Contents is prepared properly. They are simply wrong – having written an index, I know it is a boring and soul-destroying exercise, but it is also necessary. The only evident problem with the mechanics was that jezzails have unlimited range but rifles are only as effective as bows. That made no sense to us players conditioned to accept that superior technology usually wins the day. Otherwise, we encountered no obvious problem with the mechanics of the rules except some confusion over the number of figures that could fire and their effectiveness. That was quickly sorted, we think; however, the QRS and rulebook do not quite match, the photographs in the book did not quite match the rules either, and some of the photographs looked pretty but did not serve any illustrative purpose.

Overall, the sense within the group was that Congo felt a bit ‘unfinished’ and perhaps another round of stringent playtesting was required. The rules certainly needed a final proofread before the last varnish was applied. A few of us also thought that Congo was trying to find a space in a market becoming overloaded with similar-style skirmish games, from Muskets & Tomahawks to Dead Man’s Hand to Daisho and a plethora of Osprey published games. With such competition, nothing in particular seemed to stand out with Congo. However, one comment from a player at the end of the second scenario supersedes everything else in this critique; “That was fun!” Indeed, while no one in their analysis seemed overly enthused, we had a great evening playing a fun game with excellent, like-minded companions. That is surely the magic ingredient for any game designed to entertain, isn’t it? We did not even bother to total the victory points at the end because no one felt the need, but we were entertained, therefore Congo won.