A History of Jungle Warfare 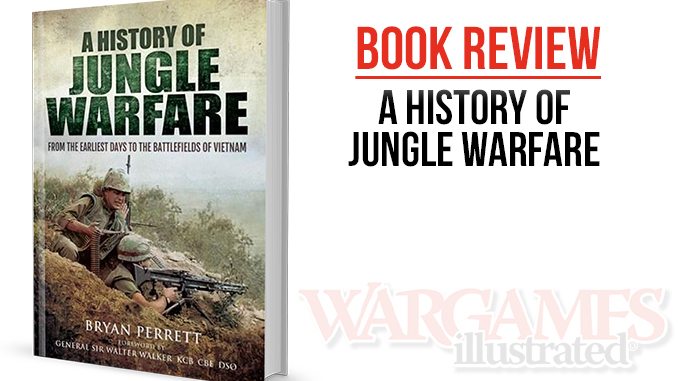 A History of Jungle Warfare – From the earliest Days to the Battlefields of Vietnam
Bryan Perrett
Pen and Sword Military, 1990 reprinted 2015
Reviewed by Dom Sore

Jungle, the word conjures up images of steamy, tropical rainforest with dense undergrowth. Not the easiest of place to fight in; heat and humidity combine to sap strength, undergrowth hinders movement and lines of sight, and canopy coverage impedes air supply. In A History of Jungle Warfare, Bryan Perrett attempts to give a history of this warfare throughout the ages. This is a straight reprint of the 1990 original in a small hard back version encompassing 201 pages of monochrome text, illustrations and maps.

This is a book with some serious issues. It is not really a history of jungle warfare but a history of modern, western jungle-fighting in mainland Southeast Asia with a detour to the Philippines. Indeed, the first chapter covers all of jungle fighting history up until WWII and spends most of that talking about temperate forest fighting in Europe and North America. There is no mention of fighting in South America, only a brief coverage of Africa, and apparently before the Japanese invaded in WWII there was no fighting at all in Asia! Also, Perrett claims that regular armed forces did not fight in the jungle until Togoland at the start of WWI, thus it would seem only Old World armies count as regular troops. Moreover, the book seems to be a print from a scan of the original; the text is fuzzy, and the pictures are sometimes not very clear.

The chapters covering the Japanese fighting in Southeast Asia are good and like all the chapters Perrett conveys a lot of information clearly and succinctly in an easy to read style. There are a lot of pictures dispersed throughout this book and all seem to be related to the text. The maps are well done, clear, and useful. The detail provided in Map 4 on the Japanese Tactics in Malaya, Burma, and the Philippines, for example, is excellent.

This is a decent read but does not do what the title promises. The minimal treatment given to earlier jungle-fighting, the obvious bias towards British and US troops, and the limited objective analysis leave the reader wanting. It is a book that is showing its age yet is full of little nuggets of information. There are numerous scenarios from WWII, and the French and US experiences in Vietnam provide good wargames ideas. The Japanese attacks across the Thai border and on towards Singapore is ideal for a series of linked combats in a campaign using Bolt Action, Chain of Command, Flames of War, or Spearhead. If you want to learn about the early history of jungle-fighting you will get little from this book, and for WWII onwards you will get better detail from other avenues. This book gives a reasonable taster of the modern campaigns in Southeast Asia, involving Western Powers, and does it decently enough, if that is all you need.