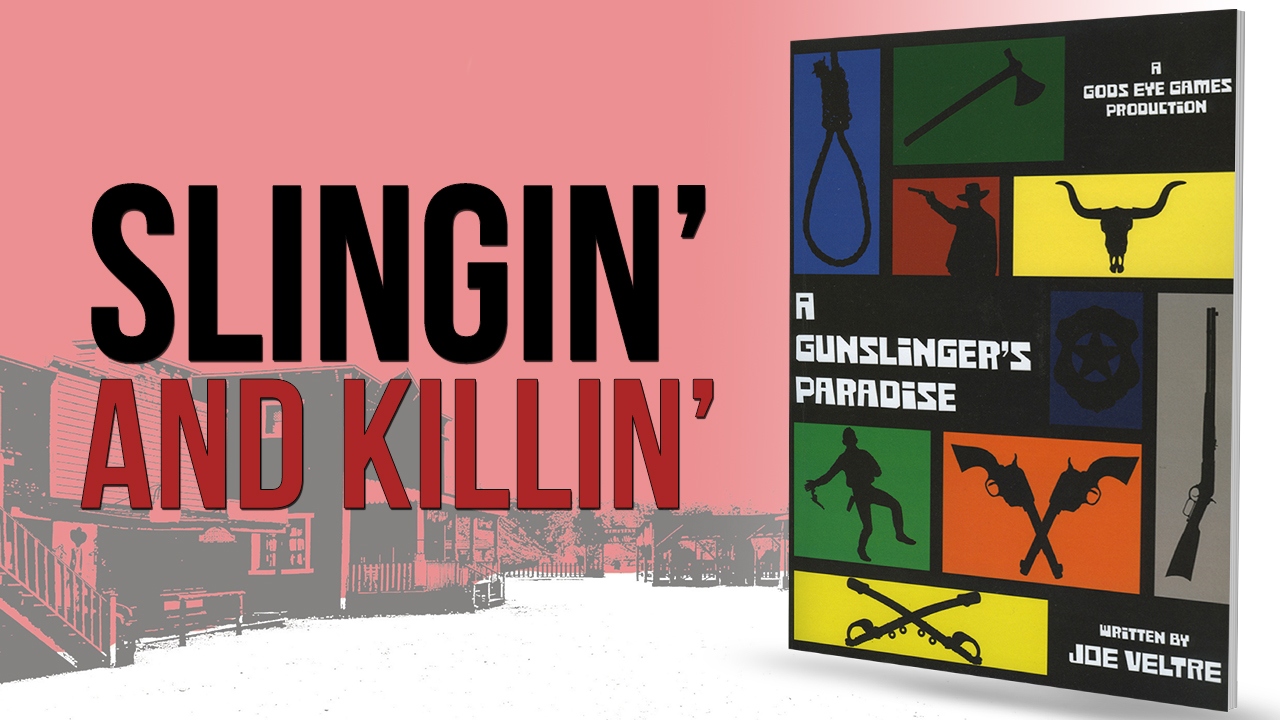 We’re taking a look at A Gunslinger’s Paradise from Gods Eye Games. This 164-page softback rulebook by Joe Veltre introduces new skirmish rules and a range of factions that you can use in wild west gunfights. Is it fine as cream gravy? We will let you know directly.

The below test is a transcript of the above video, for those who prefer to read than watch.

The style smacks you around the face from the outset with a fake film poster that is used to introduce the Rules and each subsequent section. Turning the page reveals the book’s colour and font choices – bold retro throwbacks – and the images of miniatures have a film edge and grain effect that reinforces the movie style. This could be a divisive approach, but we think it’s quite admirable that the team at Gods Eye Games have made a bold choice and really embraced it.

The writing is initially quirky, setting a tone of lightness and character that continues into the rules themselves. Again, another bold choice – perhaps one we like a little less. The rules feel a tad overwritten at the start; brevity would have made them easier to digest. We fully recognise that the writer’s approach here will really appeal to some, but when it comes to the core of a game we like as much clarity as possible.

The good news is that the game itself sounds very intriguing, based around a poker chip wagering system combined with rolling D10s. Players can use their stack of chips (which is replenished by a D10 amount every round) to bid for initiative, buy re-rolls, and even get extra actions. A deck of playing cards can also be used. The cards drawn create modifiers, from extra damage or AIM bonuses to more intriguing results, such as removing a cover bonus or giving free actions.

Character activations allow actions to be performed – many quite standard – but the ‘Western Action’ really shows the intent of the author. This is a ‘catch all’ action that can be used for whatever movielike dynamism or swagger you might want a character to perform, even if it isn’t covered by other actions. The game actively encourages a movielike approach to tabletop battles.

The Combat section is introduced on page 18 with another stylised movie poster and gets into the shooting rules. These are comprehensive, as you’d expect in a world where the speed of your draw could be the difference between life and death .They feature limited ammo, shooting to wound, and specific rules for changing weapons. All good stuff. We couldn’t, unfortunately, fit in a game of A Gunslinger’s Paradise, so don’t know how much this level of complexity might slow down games. As it’s a small-scale skirmish game we aren’t too concerned though.

We’re happy to report that Showdown rules are included; these quick-draw duels can be initiated each round.

After a run through of special weapon rules (for big guns, explosives and so on) there are compact two-page sections on Melee, Saves and Vitality, Morale, and Critical Successes, taking us through pages 26 to 37. A section on Terrain runs from page 38 to 43 and that’s the rules done with.

We’re certainly intrigued by some of the interesting ideas here and it may well lead us to dig out some of our Old West miniatures. One slight negative we’d be remis not to mention – typos begin on the book’s contents page and, like rogue buckshot in a yellabelly’s posterior, are scattered all over the place. Not the end of the world (unless you’re the aforementioned yellabelly) but something we feel could have been tidied up before going to print.

A substantial section – The Lists – runs to page 104 and covers the many factions available. There are US Marshals, Outlaws, Ranchers, US Cavalry, The Apache, The Sioux, The Bandits, The Federales, The Townsfolk, and The Hired Guns. When reading out the list of factions leaves you breathless you know you’re getting a lot for your money! Each faction list has details of the characters and costs, their skills, weapons, equipment, special rules, as well as faction themed Scenarios that are covered in more detail later in the book.

Those character skills we just mentioned, along with weapon abilities, get their own section from pages 104 to 111. That’s a lot of different things to reference and will either bring fantastic flavour or frustrating extra work to your games, depending on your preferences.

Pages 112 to 145 detail the many possible scenarios you can play; these each follow a similar layout, making them easy to reference, and we suspect you could probably work many of the scenarios into other game systems.

Rounding out the book is the Campaign section from page 146 to 162, allowing you to link games, carry over consequences from the games you play, visit town areas, generate income, even run for mayor!

A Gunslinger’s Paradise is certainly not as polished as some of the books we look at and it’s entering an already crowded genre, but the passion for the project is clear, as are the wealth of ideas and good intentions. Author Joe has tried to fit the whole kit and caboodle into this book and that, in itself, makes it a mighty tempting proposition.