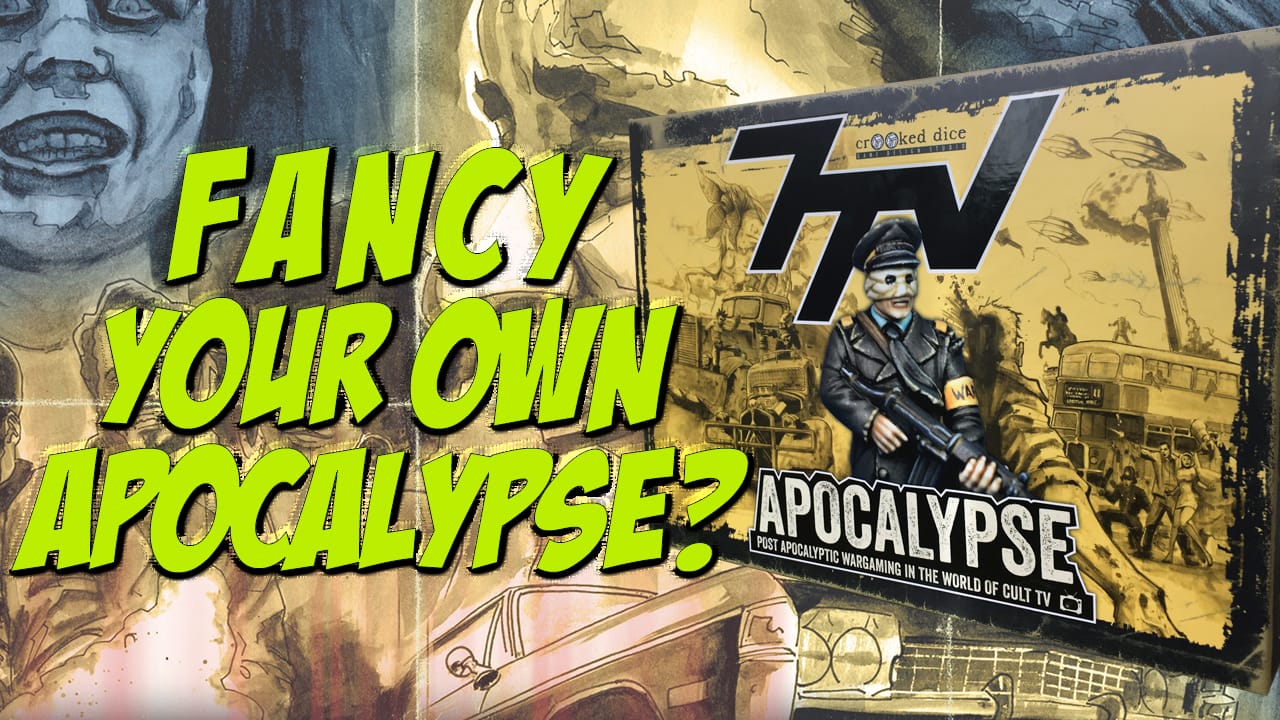 Crooked Dice Game design Studio has added a second boxed set to their range, this time themed around the movies, fiction and TV shows which focus upon the End Times and beyond. Cunningly entitled 7TV: Apocalypse, the rules focus upon allowing players to re-create and game their own chosen Post Apocalypse world, with new Cast Profiles and a brand new set of vehicle rules.

First of all, the box itself is something of a work of art, and comes in Post Apocalypse ‘distressed chic’, but is still the sturdy design which makes it an ideal way to carry your game components around. Lifting the lid, the first items which draw your eye are the Cast Profile cards. These cover pretty much every possible Archetype ever seen in the PA genre, a whopping 130 cards, which detail the all important Stars and Co-Stars, down to the Extras. If you wanted re-enact a world full of zombies, create a game or Episode based upon Judgement Day, returning astronauts in a simian dominated world or just want to get your Mad Max on, full game stats for suitable characters are on these playing card sized profiles.

Other decks of cards are suitably themed Countdown Cards, which add random events to the game whilst charting the duration of an Episode, the new Gear and Mutation cards, which allow you to add iconic equipment and create mutated people, and the all new Vehicle Mod cards which allow you to customize your chosen ‘ride’. The A5 basic vehicle cards are also included, which classify vehicles in a fairly generic way from Bike to Big Rig, and work with the vehicle rules to show the modifications available and applied to each vehicle and the full game stats.

After all that card, its’ time to look at the plastics on offer. First, we have a complete set of game tokens used to record the status of your Cast members, which also come in a bag with the suitably themed ‘MacGuffin’ token, a metal cast TV set that has seen better days. Next come the Plot Point beads, used to record how many actions a Cast can potentially perform. Then we have the all-important Blast and Turn template, used to define the figures hit by blast or area effect weapons, and also doing double duty as a template for when vehicles are maneouvred during the game. That brings us neatly to the dice, with 6 standard D6 and the Vehicle dice, split into the 3 Skid and 1 Crash dice, which are rolled when players decide to get suitably cinematic and add to the action by performing some vehicular mayhem.

The bottom of the box has a set of three softback rulebooks. These are the 39 page Director’s Guide, which covers the main rules for using figures, the 47 page Producer’s Guide which contains how to create your Cast of figures, notes on special rules and some nicely thought out suggested settings, plus a set of 8 suggested Episodes, a mix of potential games which includes 2 designed for Casts using vehicles. The Stuntman’s Guide is 22 pages of brand new rules which allows for the use of vehicles in the game, helping you create that White Line Nightmare or bash your way through the zombie hordes in that converted school bus. This book also contains rules on how to modify your vehicles, or ‘pimp your ride’ to get the most from what you have created. Creating and modding your vehicles, plus the vehicle rules themselves, largely build upon the core rules, meaning that you are simply extending your knowledge rather than learning a completely new set.

This is a top quality product and a great expansion into a popular genre of gaming. The core rules have been adapted and expanded to make this a worthwhile purchase for those with the original 7TV: Spy-Fi boxed set. In fact, most of the rules and profiles are deliberately designed to be ‘retro-fit’ to all the 7TV rules systems. In addition, in accordance with the Crooked Dice ethos, everything you need to use the rules pretty much as you like is included within the boxed set – the only thing you need to add are figures, vehicles and the imagination and enthusiasm that makes this one of the best miniature skirmish games on the market. With 7TV: Pulp, another themed boxed set, due for release at the end of May, and many more books or themed games planned, Crooked Dice Game Design Studio warrants some additional attention in the future.