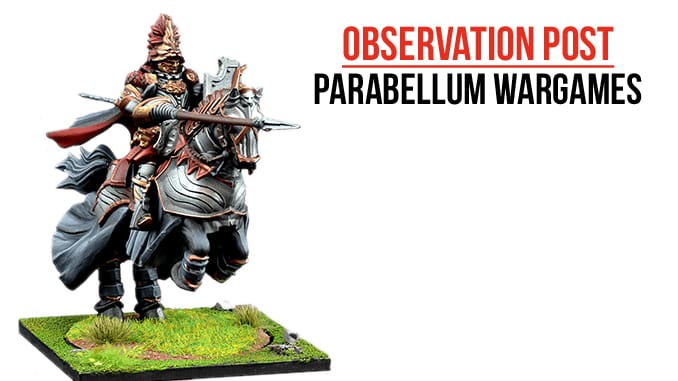 Parabellum Wargames continue to make progress with their Conquest: Last Argument of Kings pseudo-fantasy / historical rules and background. At the UK Games Expo, they had some samples of the figures from the core set on offer, so we grabbed a selection to take a look.

The first thing to realise is that these are large miniatures, measuring 36 to 42mm foot to eye depending upon the faction. The premise of the game is, after a cataclysmic event called The Fall and the Long Winter that followed, humanity has managed to claw its way back to a semi-Feudal system, and has begun to expand, encountering a host of new enemies and potential allies. At the core of this re-born humanity is the 100 Kingdoms, an squabbling group of Nobles who seek power and a return to an all-encompassing Empire. Facing them are the denizens of the Spires, who practice ancient arts of Biomancy to create armies of vat grown genetic monstrosities.

We have a number of frames from the Core and Support boxes. The first is the Mercenary Crossbowmen. There are 6 multi-part figures on each frame, with 2 frames per support box to create 12 plastic miniatures in total. One of the frames comes with the option to create 2 Command models (not shown here). In addition, the support box comes with 3 Infantry Plastic Stands with spaces for 4 figures on round bases, 12 25mm round Bases and an in-game Command Card

The second frame consists of enough parts to construct 6. These are a mainstay of the infantry options available for the 100 Kingdoms, more heavily armoured than the crossbowmen and armed with swords, with optional shields. Again, frames of this type are in the core box set, and the support boxes. The support box also contains 2 frames, so that’s 12 multi-part figures to assemble, for one of the most important troop types. The same mix of ‘squad’ and individual bases is present in the support box, with a gameplay Command card.

The last frame we have is for a single miniature, again a multi-part figure, but this time designed to create a mounted Noble Lord, providing you with a leader for your force. This is a heavily armoured figure, with an armoured horse. There are few options on the frame, with 22 separate parts to create both horse and rider.

These are characterful, well-sculpted miniatures. They are intended for fantasy gaming, but some could work with historical gaming as well, with some judicious removal of the ‘fantastical’ aspects. The background to the game seems suitably different to others on the market, and the figures themselves add another option for those looking to game in larger scales. We intend to feature the Core Box in a future edition of Prime Time, focussing upon the rules, the opposition to the 100 Kingdoms and more.