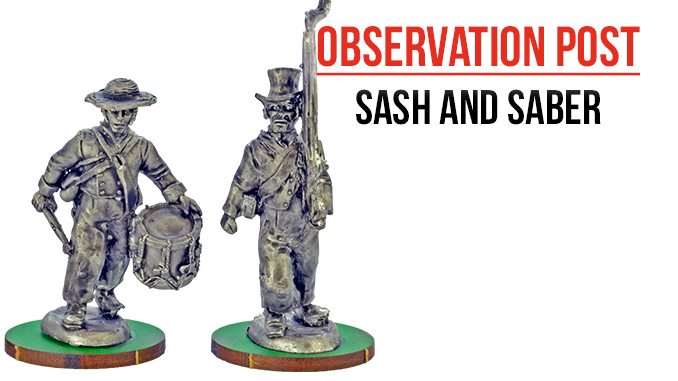 The U.S. company Sash and Saber produce a whole host of excellent wargaming miniatures for those wanting historical accuracy but big armies. One of their 40mm ranges represents the forces involved in the War of 1812 between Britain and America.

The pack provided is 40AMW 4 Militia in Civilian Dress. There are twenty figures in the pack, all with separate heads with different styles of headgear and in a variety of civilian dress of the period. The majority of the miniatures are in marching poses and wear military equipment over their clothing. There is also a command group included in the set, comprising an officer, standard-bearer and drummer, who are all in military uniform. The officer has a choice of arms wielding swords.

This is a great pack to build an ‘instant’ regiment, simply needing the heads to be glued into the sockets, painting and basing as per your chosen rules. As with any similar period, the opportunity to field miniatures in civilian dress makes a refreshing change from the seamless ranks of uniforms. Equally, the miniatures represent the bravery of patriots who have left their ordinary lives and rushed to defend their country as militia rather than in the regular army. This is only one of the packs available in one of the 40mm ranges offered by the Sash and Saber company. They are well worth a look, not least because the pack and pricing strategy enables you to get more for our money but not at the expense of quality.