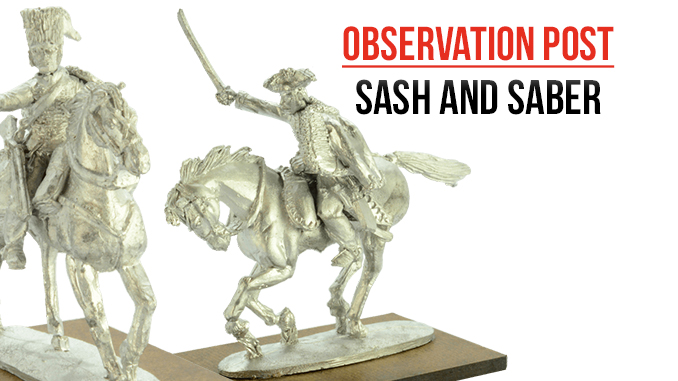 Received from the USA are two hefty packs of 40mm miniatures, representing 7 Austrian Hussar Troopers and 3 Hussar Command figures from the Seven Years War period. Cleanly cast, the riders come with separate heads, carbines, saber wielding hands and pelisses. The uniform appears accurate for the period and the overall look of the figures after assembly is very good, with plenty of animation in each horse and rider combination.

Once the hands are attached, these are figures ‘at the charge’, as you would expect. The expressions on the figure’s faces doesn’t always match the aggressive posture but then, these are professional soldiers and perhaps they don’t need to scream as they go? Too many figures these days have more of a caricature ‘look’ rather than the realistic.

The command pack includes and officer, bugler and NCO. The Officer wears a tricorne for ease of recognition. Not all the riders have a pelisse to attach to their left shoulder but they are nicely rendered.

A useful pack of cavalry that looks good when assembled. Sash and Saber offers some of the best, most varied ranges of 40mm figures on the market and these are no exception.

POSTAL DELAY TO THE USA