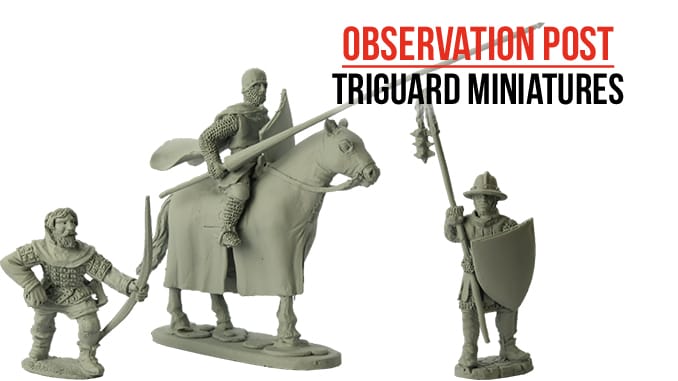 Triguard Miniatures of New Zealand have a number of ranges in 40mm. One of these is based upon the Medieval period, with a number of knights, men at arms and peasants in different poses and a variety of weaponry, including both mounted and dismounted figures.

The first figure sent for review is a Knight on caparisoned horse, pack codes KC16 and KH9 respectively. The knight comes with separate lance arm and shield, needing minimal assembly and placing on the horse. The sculptor has done a great job capturing the billowing cloak and chainmail armour of the knight. In addition, the horse is very well done, with some good ‘drapery’ of the caparison.

The second figure is a Men-at-Arms, with a separate double-handed flail and shield. Chainmail, helm and garments are all very nicely sculpted, and really captures the sense of a determined warrior advancing into battle.

The final figure is a Peasant Archer with bow, quiver and hatchet. He wears a studded jacket and hood, with patched hose. He is posed in the action of drawing his next arrow, looking for a target or having picked one out to dispatch from afar.

These are great examples of the art of sculpting at this larger figure size, and each figure has some character. They are well worth a look for those who enjoy skirmish gaming the Medieval period or even putting together an army of such miniatures.