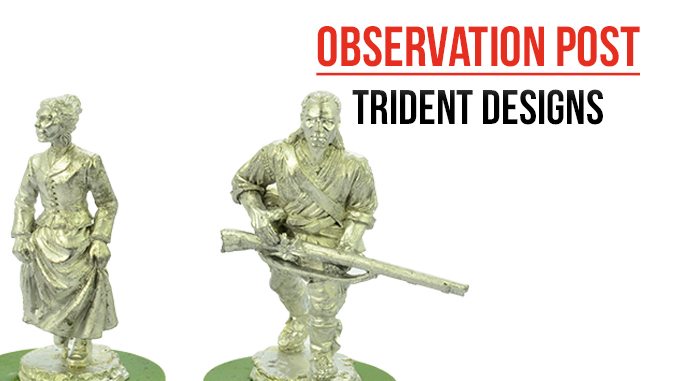 Trident Designs from the Miniatures Service Center continue to add to their excellent range of French Indian War / Seven Years War miniatures. We received samples from SYWC 7- Last of the Mohicans set, amongst others.

We picked out Alice Munro, Major Duncan Heyword and Hawkeye himself as examples to feature the excellence of this range. The level of sculpting and attention to detail on these figures is excellent. The depiction of clothing, weapons and equipment is very fine and the likenesses to certain actors are very well done. Like all 40mm miniatures, these would benefit from a careful paintjob, largely due to the need to show such miniatures off at their best. However, this level of detail should not put off the less accomplished proponent of the brush, as the details are raised enough, with plenty of undercuts, that they more or less paint themselves.

The same can be said of many of the miniatures from this company, who seem to specialize in creating 40mm masterpieces. Even the most basic soldier has seemingly had a level of care lavished upon him during the sculpting phase. As a figure size, 40mm is a tough one to pull off due to the more ‘close up’ nature of the subject but this is a company that manages to do so with style.