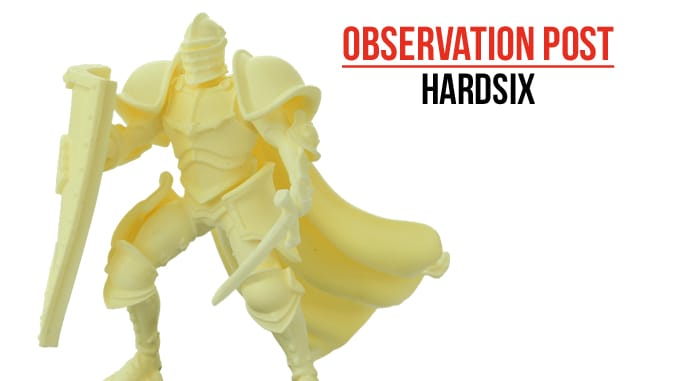 Hardsix Gaming of Toronto, Canada have an upcoming tabletop skirmish game entitled Kingdom & Empire. This is a fantasy medieval game setting where technology is powered by magic and warring kingdoms vie for control of resources and land.

Shown here is an example of an assembled Missionary MKII Praetorian suit. These come in a black craft box with a stamp that includes a base and card with the various game related information. The card design is currently in the WIP state but is a good indication of what will be the final product.

In the game universe background, Praetorians are basically large, magically powered armoured suits that are “Piloted” by a warrior inside wearing the suit. There are mechanisms inside the suit facilitating movement and a large amethyst crystal behind the pilot which magically reduces the weight of the suit. This combination of technology and magic allows the Pilot to operate as a regular warrior would wearing armour once they have received sufficient training.

The models are true scale, cast in resin and produced in house in Toronto Canada with no outsourcing of any kind. A standard human model of between 38-40mm is riding inside it. A standard list will feature between 3 – 4 Medium praetorians similar to the Missionary. Other figures in the range will be more obviously ‘standard’ medieval fantasy themed.