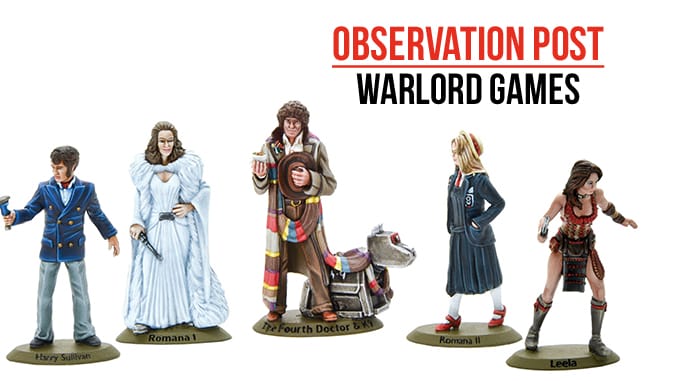 Warlord Games continue to add more boxed sets of miniatures for use with their Doctor Who: Exterminate! tabletop skirmish game. The latest is perhaps the most well known of the Classic era Doctors, as portrayed by Tom Baker.

The elegantly designed box contains 5 equally elegant miniatures, based upon the Fourth Doctor & K9 (two figures on one base), Naval medical doctor and UNIT member Harry Sullivan, the slightly superior Time Lady Romana I, the more childlike Romana II and Leela, warrior of the Sevateem and a dangerous person.

All the miniatures are based upon images supplied and approved by the BBC and are almost exclusively created using CAD software. This means that they are the most authentic looking sculpts available and straddle the gaming and collectible miniature market.

Romana I wears the floor length garment she was first seen in during the episode entitled The Ribos Operation. They haughtiness and slight arrogance of the character has been nicely captured.

Romana II is a regenerated Time Lady with a very different personality. This is a more adventurous character than the previous version, more akin to the Doctor. She wears the schoolgirl outfit from City of Death.

Harry Sullivan was a somewhat hapless but heroic companion. A lieutenant in the Royal Navy, Harry was attached to UNIT as a medic, becoming a companion and traveling with the Doctor and Sarah Jane. He is depicted with one of the weapons from the episode Ark In Space.

Leela is from a warrior tribe, and had a somewhat simple solution to problems: if in doubt, kill it! However, she learns that this is not always the best option, but retains her warrior instincts, saving the Doctor’s life on many occasions.

The Fourth Doctor figure is actually two figures in one. The trademark long scarf and floppy hat of the character is here, with a great likeness of the character who offers a white paper bag, perhaps containing his favourite distraction technique, the jelly baby. On the same base is K9, the robotic dog that accompanied the Doctor on many of his adventures, capable of computations and combat action in equal measure.

Although all the figures are excellently done, I have a small gripe: by placing the K9 figure on the same base as the Doctor, you miss out on having a separate character for use in the game. Some very, very careful modelling work could see K9 removed from the Doctor’s base, but there is a chance of damaging one or both models.

The boxed set includes twelve EXTERMINATE! game cards and makes a fitting tribute to one of the longest serving and most well known of the Classic series era actors. Warlord have really got into their stride now with these miniatures and have many more planned, including coming fight up to date with the current incumbent of the TARDIS.