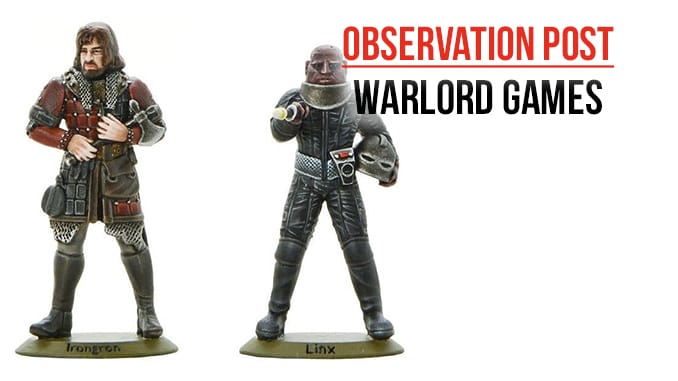 Warlord Games continue to produce miniatures for the Doctor Who: Exterminate! rules. These are a blend of Classic and Nu Who era. One of their latest releases is three boxes of metal Sontarans, representing characters and troops from various episodes.

The Sontaran Squad consists of five figures, which represent members of this clone warrior race. Although scaled to the other miniatures, the Sontaran warrior race are shorter than most of the other species featured. Consequently, these miniatures are slightly smaller when placed next to others in the same range, which still makes them taller than the more traditional ‘28mm’.

The five figures are all clad in the modern version of their battle armour, complete with domed helmets designed to protect their ‘spud-like’ heads. They all carry Sontaran blasters and are depicted either advancing, kneeling or firing.

The second box compliments the first. This is entitled Sontaran General Staal and represents one of the main characters from the Nu Who series. General Staal, known as ’Staal The Undefeated’, led the failed invasion of Earth in 2009, consequently losing his life and proving his title to be inaccurate! The Staal figure is depicted helmetless, carrying his helmet under one arm and his battle scepter in the other hand. He comes with two bodyguards, both helmeted Sontaran Warriors, and also both different sculpts to those in the Squad set, a nice touch by Warlord.

The last of the current Sontaran-themed sets is based upon a story from the Classic series. Entitled ‘The Time Warrior’, the story saw a Sontaran warrior called Linx stranded in Medieval England and working with a local bandit chief, Irongron, whilst he tried to repair his ship. Both Linx and Irongron feature in the boxed set, with Linx sporting the much older design of Sontaran garb and a different type of weapon. In the story, the Third Doctor and Sarah Jane Smith defeat both characters and rescue a group of scientists that Linx has kidnapped using a time travel device. Although this is a great set, the absence of a Third Doctor and Sarah Jane miniature make it difficult to re-create the story.

All of these sets come with Exterminate! game cards, thereby making them compatible with the game. These cards consist of both Sontaran themed and generic game specific ones, adding more to the rules and gameplay. The Warlord partnership with the BBC continues to bring some out-sized, unique miniatures to the market, albeit ones which are larger than most of the historical figures available.