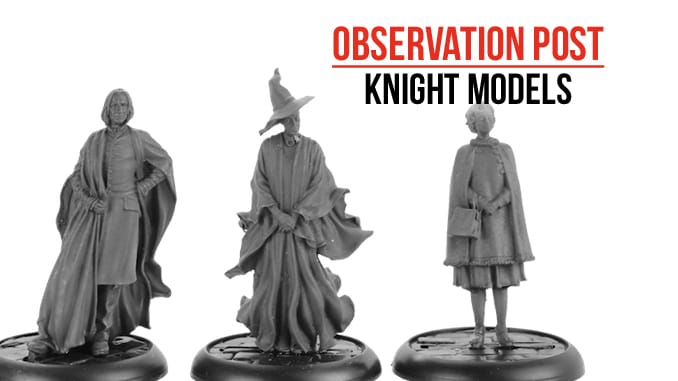 Knight Models have produced some benchmark miniatures for this literary and movie franchise. Based as closely as possible on the characters from the movies, the figures for the Harry Potter Miniatures Adventure Game have managed to surpass all expectations.

These figures are fairly thin and tall but subscribe more to the ‘realist’ school of sculpting rather than more traditional fare. As a licensed product, the sculptors have obviously had access to a wealth of information from the movies, so these are the most accurate 3D versions of the characters depicted as you are ever likely to see.

However, these are also intended for gaming use, so each set of figures comes with game materials. For example, we have here the Hogwarts Professors blister pack, which contains Umbridge, Snape, McGonagall and Lockhart. The figures are excellent, cast in a forgiving resin,  and a nice touch are the slotta bases, which are lipped but have a cobblestone effect sculpted onto them. Also included in the blister are character cards for each figure, 4 Spell cards and 1 Artefact card, all designed to define the characters within the game system and enabling players to expand their options.

The other set we’ve chosen for review is the frankly fantastic Albus Dumbledore boxed figure. Although there is only one actual character in this box, the beloved Headmaster of Hogwarts comes with a choice of bases, either a standard 30mm round or an amazing 60mm base, upon which is placed a scene of true magical power. In game terms, the choice of base determines what the character can do in the game – if placed on a 30mm base, you use one character card and if using the 60mm base, you use the other. This provides different choices of spells for the character, which is all explained in a nifty scenario booklet included with the set, which also doubles as assembly instructions.

These are great figures, which function as both collectibles and gaming miniatures alike. The likenesses are excellent and are a fitting tribute to the actor’s work to bring the Harry Potter movie franchise to life. They also show the level of commitment from the sculptors and staff at Knight Models, who obviously care enough to ‘get it right’.