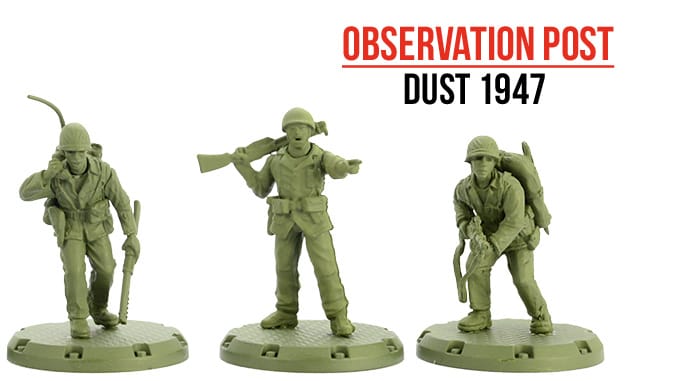 Dust 1947 is the official line of gaming and collectible miniatures from the mind of the incomparable Paolo Parente, head of the continually innovative Dust Studios team. This time around, we’re taking a look at two types of infantry models available in what could be termed ‘heroic 28mm’ but are more akin to 35mm sized.

Dust 1947 is a concept whereby the history of World War Two diverged through the discovery of Vril technology by Nazi Germany. This alien technology was fused with earthbound creations to produce new weapons, including power armoured suits, Walkers (a type of mecha, walking tanks), advanced aircraft and more. The whole thing began as a series of art pieces and comic books created by Paolo Parente and grew to become an entire wargaming universe. There are many factions, based upon those from WW2 and more, including mercenaries and the followers of the Elder Gods.

The two infantry sets we have for review are the USMC Command Squad for the Allies and Vasilily Lieutenant Kiritchenko of the Spetsnatz for the Sino- Soviet Union.

The USMC Command Squad consists of five miniatures. This particular boxed set comes ‘Primed’, which means the high quality plastic figures are already on quite thick bases and have a coating of green primer. They are presented in standard USMC uniforms and equipment, complete with small arms such as the BAR, M3 ‘Grease Gun’ and Winchester pump action shotguns. There is an officer pointing, a radio operator, LMG support and two figures with SMGs, one intended for use as a medic, the last figure being the most ‘Dust 1947’ in that it is intended to be used as a mechanic, a ‘medic’ for combat vehicles used in the game. The set comes with a game stat card for the Dust 1947 tabletop game.

The next boxed set is one of the many individual character miniatures in the range. Representing a member of the Sino-Soviet Union forces, Vasily is a member of the SSU special forces, the Spetsnatz. This characterful miniature carries a large flag, representing the SSU banner, and is primed in a sandy colour. Like all the character miniatures in this range, this figure comes with a game stat card, which contains all the special rules for using the figure and adding their abilities to your force.

The bases add to the height of the miniatures but it is possible to remove the figures from their bases quite easily. By re-basing onto thinner, flatter bases, it would be possible for them to fit in, to a certain extent, with ‘heroic 28mm’ ranges of WW2 miniatures. These larger figures would also make useful, easily spotted HQ, special unit and character miniatures for use during more ‘traditional’ games.

These are just a few of the Dust 1947 miniatures that are available in the range. Available from the US or Europe website, why not take a look at some of the wider range of infantry and character figures. We plan to cover the rules and some of the Walkers and other vehicles in a future Primetime.