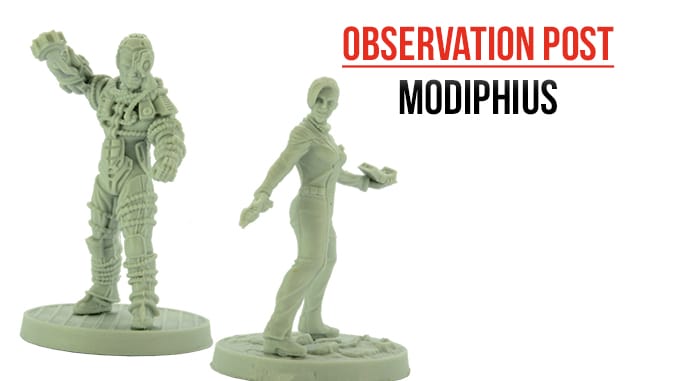 Modiphius continues to add to its range of Star Trek Adventures miniatures. Following the release of the Red Alert! miniatures combat game Beta test rules (which will be out in the Operations Division supplement soon), new sets of figures have been released.

The first sets of miniatures focused upon the central characters from the Classic and Next Generation TV series. You could game as Kirk, Spock, Picard or Doctor Crusher. However, the Klingon and Romulan figure sets were generics, with character miniatures where RPGers could add their own layers of characterization.

The new Red Alert! skirmish combat rules bring the action of Star Trek to the tabletop. They offer an opportunity to play out that perennial favourite part of any of the different TV or movie franchises, the Away Team. To that end, the first boxed set we have for review is the Next Generation: Away Team.

There are 10 miniatures in this set, all in the regulation uniform of the United Federation of Planets during the Next Generation era. However, these are not the TV or movie characters, instead they are a disparate number of crewmen from a variety of backgrounds. In keeping with the nature of the show, there are a male and female character from many of the members of the Federation. We have Andorians, Denobulans, Vulcans, Tellarites and two crewmen who are distinctly humanoid. That provides a whole series of opportunities to create a character from a variety of races and genders. Plus, the poses of the miniatures and even their facial expressions give hints as to the nature of their role and overall character, from those with heavy phasers to those consulting tricorders, perhaps security and science officers respectively?

The next box contains one of the most iconic ‘races’ introduced during the Next Generation years, who then appeared across the movies and in other Star Trek series as time went on. Consisting of humanoid species augmented by cyborg and software ‘upgrades’, we have 10 members of the Borg Collective, with an equal mix of male and female Drones. In the TV shows and movies, their chilling refrain of ‘You will be assimilated’ and their ability to adapt to any attack upon them made them a frightening, implacable foe. These are also very characterful sculpts, perhaps more useful as enemies to be overcome than as characters to play but who knows, being part of a hive mind could be some gamer’s thing!

These figures are all cast in a tough resin that doesn’t easily bend or break. As with most resin and some plastics these days, the level of detail is exceptional and is a true reflection of the abilities of the sculptor. Each miniature is cast upon a suitable base and simply needs a suitable paint scheme to be tabletop ready. Created in the same vein as the fantastic Fallout miniatures and the excellent work from Mantic Games with their Walking Dead range, the significance of creating licensed miniatures using metals seems increasingly archaic.