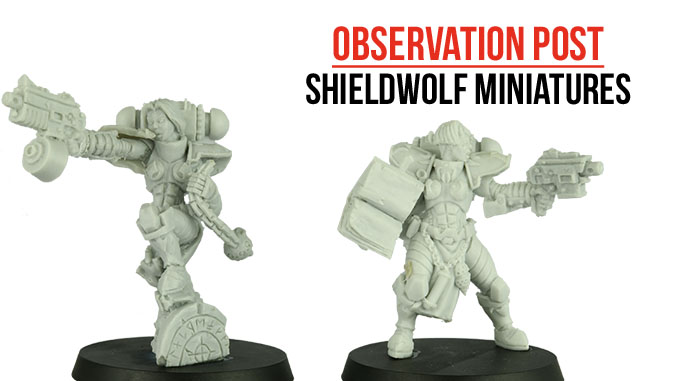 Shieldwolf Miniatures, having run a successful Kickstarter, have begun to release their products to the retail market. This includes female figures for use in the fantasy genre, the Sisters of Talliareum, and the female sci-fi ‘paladins’, the Sisters of Faith.

The optional components include various arm and weapon types for customization purposes. Each sprue contains 4 different bodies, with optional front and rear tabards, shields, 4 different pauldron sets and multiple head variations, with both helmeted and unhelmeted versions. All these options allow the creation of unique regiments. Each boxed set is supplied with twenty plastic 25mm square bases.

Also received for review are two characters for any sci-fi setting. Cast in resin, these are two characterful figures for The Sisters of Faith, a force consisting of female warriors in powered armour who battle against the forces of evil in a grimdark universe. As character figures, the heroic, active poses epitomise the stoicism of the resistance offered. The level of detail is of a high quality, and these figures are closer to 28 than 32mm.

As a concept, these are aesthetically akin to the output from much larger companies. The plastic used to create the multi-part kits is very durable, but the figures themselves are quite difficult to assemble straight out of the box and the overall level of detail is below the standard of some companies. They are also a little out of scale with other figures of their ilk.

In contrast, the resin sci-fi figures are much better, ticking a number of boxes for a certain type of warrior. I query the need for ‘boob plate’ armour, especially given the number of real world sources available, but these figures are designed to an established aesthetic, albeit one which is somewhat out of date.